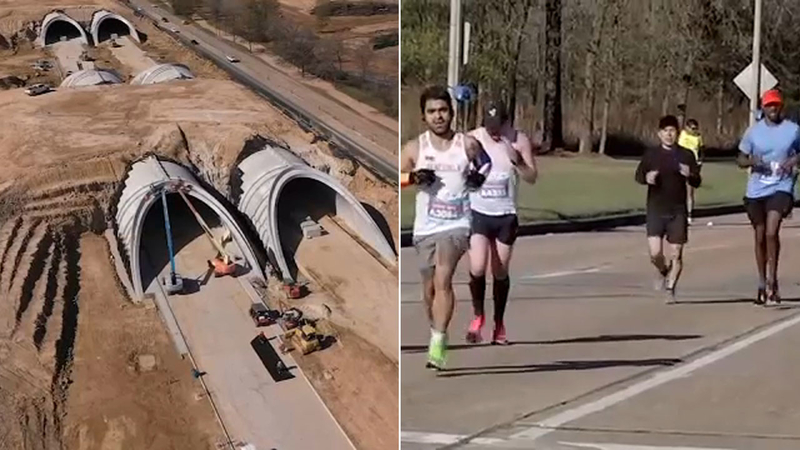 Chevron Houston Marathon runners will be 1st to use new tunnels

HOUSTON, Texas (KTRK) -- The tunnels built for Memorial Park's Land Bridge are scheduled to open this spring to traffic.

Runners with the Chevron Houston Marathon will get a sneak peek this Sunday. Eyewitness News learned the south tunnel will be used as part of the race.

Randy Odinet with the Memorial Park Conservancy said with construction on track, they thought about the idea with the Houston Marathon Committee. They looked into it and found out it was possible.

"Could they go through the tunnels?" Odinet recalled. "It's working out real well. The level of completion of the roadway work is falling into place to safely put runners in there."

In Dave Ward's Houston, a look at how Memorial Park became to be the runner's mecca that it is now.

Wade Morehead with the Houston Marathon Committee welcomed the addition to this year's race. He called it a perfect fit given the marathon's history with Memorial Park.

"We're really, really excited to be the first ones to be going through the tunnel," said Morehead. "Our relationship with Memorial Park goes back to 1972 when the first marathon was conducting, running around the park with just over 100 runners."

The land bridge is part of a $70 million project that includes a prairie restoration. It's slated to be completed and open to the public by year's end.

4 million visitors a year, home to one of the most popular running trails in the country, and twice the size of New York's Central Park - Memorial Park has something for everyone!

Diana Izaguirre isn't running the Aramco Half Marathon for herself. She wants to cross the finish line to honor her daughter who passed away five years ago.