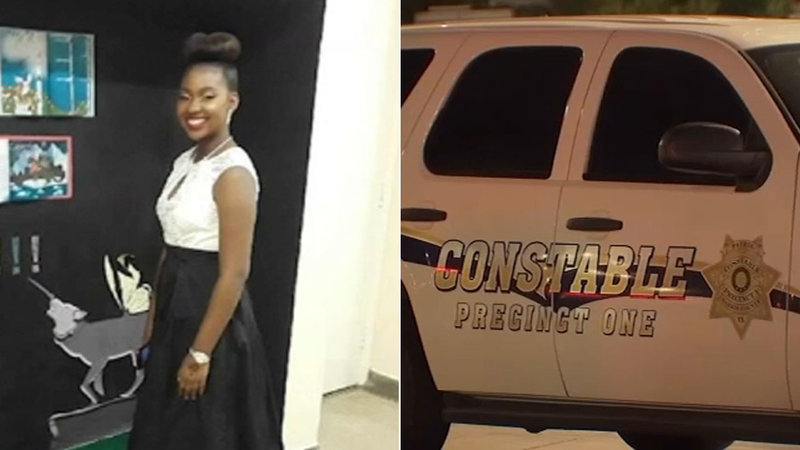 Teen's charges dropped after she was shot by deputy

HOUSTON, Texas (KTRK) -- Charges have been dropped against a 17-year-old girl after she was shot by a Harris County Precinct 1 deputy constable near NRG Stadium.

Charisma Hannibal was still being held in jail Tuesday morning on an unrelated warrant, but the charges against her, tied to the deputy-involved shooting, have been dropped.

The district attorney's office said all of the evidence will be presented to a future grand jury to determine whether charges are warranted.

The day after Christmas, the teen was shot by a Precinct 1 deputy constable while allegedly driving a stolen car.

Houston police say Hannibal was driving erratically in an off-limits parking lot at Reliant Park, and the deputy tried to stop her.

The deputy involved in the shooting has been terminated, with officials adding that the "conduct was not consistent with departmental policies."

Investigators say Hannibal eventually stopped and got out of the vehicle. That's when the deputy gave her verbal commands, which police say she ignored.

When the teen tried to get back into the vehicle, the deputy shot her, investigators said.

Hannibal then drove away from the area, leading to a short chase that ended when she got to a closed gate.

The teen was taken into custody and taken by paramedics to a hospital with non-life threatening injuries. The deputy was not injured.

Hannibal was initially charged with aggravated assault against a public servant and felony evading arrest.

The deputy who shot the teen has since been fired from her job. A review found the deputy's conduct was not consistent with departmental policies, Constable Alan Rosen said.

"It could be happening because they feel like maybe the fact that this teenager was shot is somehow more severe than the charges she was facing, and in order to equalize things, they thought, 'We'll dismiss it.' It will be less trouble from her in terms of a legal battle," ABC13 legal analyst Steve Shellist said. "But I think probably more practically, they dismissed it because their star witness has been terminated."

Precinct 1 confirmed there is body camera footage of the incident, but when asked if it would be released Rosen said: "at some point. I believe in transparency too."

The deputy involved in the shooting has been terminated, with officials adding that the 'conduct was not consistent with departmental policies.'