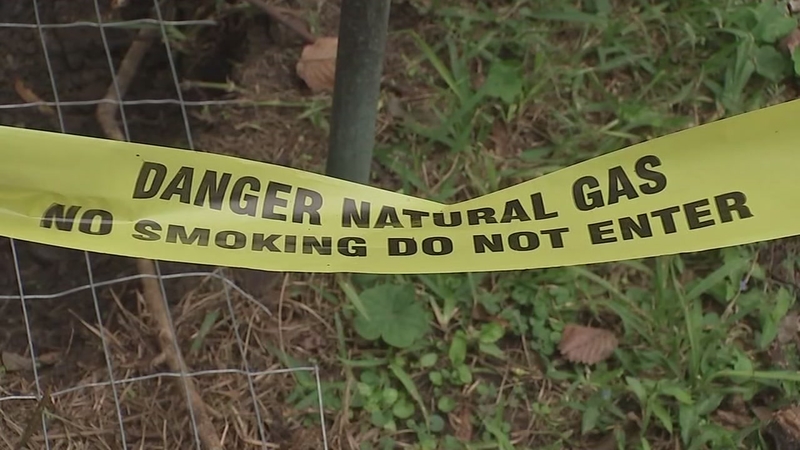 HOUSTON, Texas (KTRK) -- Pat Edwards has lived in her Spring Branch home for about 15 years, and she has no plans to move. It would be nice, though, if she can garden and walk her dog without the smell of gas.

A few years ago, Edwards smelled a gas leak. She called Centerpoint, which looked at it, and determined it wasn't a danger and that they would get to it.

Last week, Centerpoint finally showed up to her house, dug a hole by the gas meter near the back fence, ready to fix her gas leak once and for all.

"They dug the hole, and apparently they realized the main gas line is on the other side of the fence. Of course, this is an easement, and they looked and saw the cars, and said, 'Not going to get to it,'" recalls Edwards.

It turns out her neighbor on the other side of the fence has managed to park 10 cars in the backyard, including on top of the utility easement. Centerpoint technicians knocked on the door, got no answer, and had to leave without fixing the leak.

"It's just back to back cars. They move them in the middle of the night so nobody could see," said Edwards.

On Monday, Eyewitness News tried to knock on the door. We also got no answer.

We have reached out to several city of Houston departments. They are currently looking to see who has the authority to force the neighbor to move his cars.

In the meantime, Edwards has put a screen on top of the hole, trying to keep her little dog from falling in.

I know it’s all Trump & Beto today, but there are still other stuff going on... like this nice Spring Branch resident who can’t get her gas leak fixed because of her neighbor’s junk cars. 😬😬 #abc13 at 5! pic.twitter.com/3mxv03YwTf