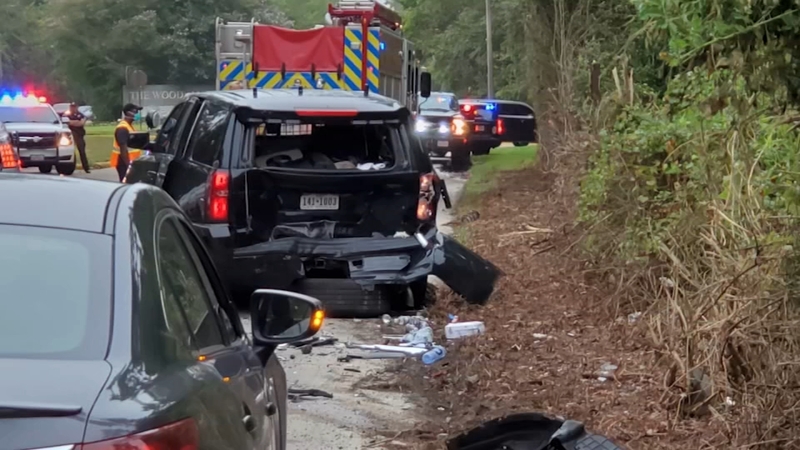 Since the crash, Brian Edwards says things have not been the same as he is still healing from the incident in which he suffered a spinal injury.

MONTGOMERY COUNTY, Texas (KTRK) -- Brian Edwards drives through The Woodlands every day for work, but on Sept. 10, he didn't get very far before he was hit.

"I was frankly surprised, like 'Whoa, what just hit me?'" said Edwards, who is still feeling the residual effects of the accident more than three months later. "So, I look behind me on my left shoulder, I saw a Lexus SUV swerve to the left, zoom past me."

Edwards said he watched as the Lexus then hit a deputy constable's patrol vehicle.

"I was thinking, 'Oh wow,' It really felt like something out of a movie," he said.

Edwards didn't know at that moment, but the man behind the wheel was Montgomery County Judge Mark Keough. The Judge, the deputy constable, and Edwards all suffered various injuries and needed medical treatment. Judge Keough was in the hospital for several days.

The car crash initially made headlines, but the investigation by the Texas Rangers took time, and things grew quiet.

Meanwhile, Edwards continues to get treatment for spinal injuries he suffered as a result of the accident.

"I haven't been the same since that accident. I got rear-ended. There's an abnormal spine," Edwards told ABC13.

Then last week, Judge Keough was charged with DWI by the Montgomery County District Attorney's Office. Court records show the Judge had a substantial amount of Ambien, a sleep aide, in his system.

"I want to make it clear to you, there was no alcohol present, no illegal substances at the time of the crash," Keough said via a Facebook video he released.

"Our criminal justice system is set up to protect the rights of all those accused. We ask that no one rush to judgment as all the facts are not yet known. Judge [Mark] Keough understands the district attorney must investigate allegations concerning citizens of Montgomery County and he respects the judicial process. We have been informed that the allegations do not involve any alcohol, illegal drug, or narcotic, but rather prescription medication that is within the therapeutic range."

This week, officials released the judge's mug shot. He has continued on his job. Edward's lawyer though, would like to see the judge take responsibility for the injuries he's caused.

"He's an elected official," said attorney Allen Zwernemann. "He's held to a higher standard of conduct, and it is negligent for someone to rear-end somebody, and it's grossly negligent if someone is under the influence."

No civil lawsuits have been filed. Edwards says Judge Keough has not reached out to him to see how he's doing.