Blue house in front of Minute Maid Park on the move 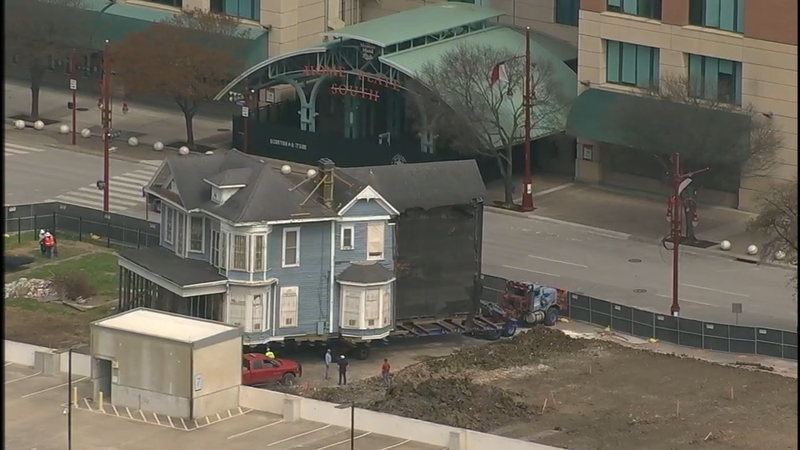 ABC13's helicopter SkyEye was overhead Friday morning as the structure, which is actually named "Cohn House," was loaded onto the back of a truck as crews worked around it.

Astros fans, or anyone who has taken a trip to the ball park, have likely seen this two-story house.

It's located on Avenida de Las Americas, just south of Minute Maid, though, that's clearly soon to be its former location.

Eyewitness News did a profile about the house in 2017 and learned it was built just after the turn of the 20th century by Arthur Cohn on Rusk Street. Cohn was a businessman who eventually became one of Rice University's earliest treasurers.


The home was sold over the years. It amazingly escaped demolition unlike many other older buildings in the city. Four years ago, ABC13 talked to Peter McStravick, who worked as the chief development officer for Houston First.

McStravick said, several years ago, the city of Houston bought the structure and moved it to its current location. It was going to be part of a planned heritage center.

"Unfortunately, the oil and gas industry and the markets did not hold their value," said McStravick. "So we decided to go ahead and postpone the project."

At the time, McStravick said the future of the Cohn House looked bright.

But then in 2019, another twist. A company affiliated with the Astros, 1800 Texas LLC, was announced as the buyer of a parcel of land across from Minute Maid Park. The purchase was worth $17 million.

The plot was also where the Cohn House sat and the neighboring railroad train engine.

The land was earmarked as a "mixed-use" project.

It turns out the iconic house won't have too far to go, though. The city of Houston said it will be moved a block north of the ballpark, but there were no specific development plans for it.


The city added the house will likely move east of I-59 to a city park in the longer term.

As for the train, it previously moved away from the area and will eventually be part of the Texas Railroading Heritage Museum.

By the way, doesn't it kind of look like the house from the movie "Up"?