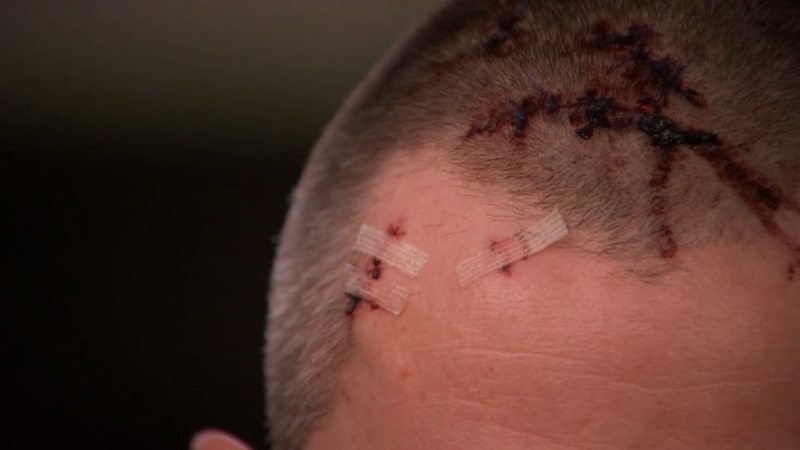 "This suspect has been apprehended and charged with assault, bodily injury," Acevedo said. "Proud of the work of @houstonpolice Major Assaults and CRU."

The suspect, 32-year-old Patrick Kelly, who is a U.S. Navy Veteran, is listed in court records as being charged with assault, bodily injury. Kelley appeared in court Thursday afternoon following his arrest Wednesday night. Police said Kelly also had cocaine on him during his arrest.

Employee Josh Vaughan had to have 10 stitches after he was attacked Monday while working the door at the Grand Prize Bar on Banks Street.

The conflict began with the customer [Kelly] who did not want to wear a mask, Vaughan said.

When he approached him as he was leaving the restroom, Vaughan said Kelly assaulted him.

"Before he could even say 'mask' the guy just took the glass and smashed it over his head," said general manager Lindsay Beale.

"I've never gotten full on blasted like this. He was quick. He was fast," explained Vaughan. "He got me good."

The glass broke on Vaughan's head. He went to the emergency room and needed 10 stitches. The customer ran out the door, but a cell phone camera captured his vehicle leaving.

The staff at Grand Prize said they take all of the COVID-19 safety measures seriously. They take temperatures at the door and customers must wear masks unless they are eating or drinking. Employees also get tested for the virus every two weeks.

Beale also has a list of rules that sits on each table in the bar.

"We have people who want us to enforce those rules for everybody's safety," she said.

The bar circulated the man's picture and police said they had the name of the possible suspect the next day. By Thursday, Kelly had been arrested and charged.

Investigators said Kelly had has no criminal record and this was his first arrest. Records show his bond was set at $2,000.

Acevedo said more details about the arrest would be released later on Friday.

This suspect has been apprehended and charged with assault, bodily injury. Proud of the work of @houstonpolice Major Assaults and CRU. More to follow later today. https://t.co/klA1jNXcOb