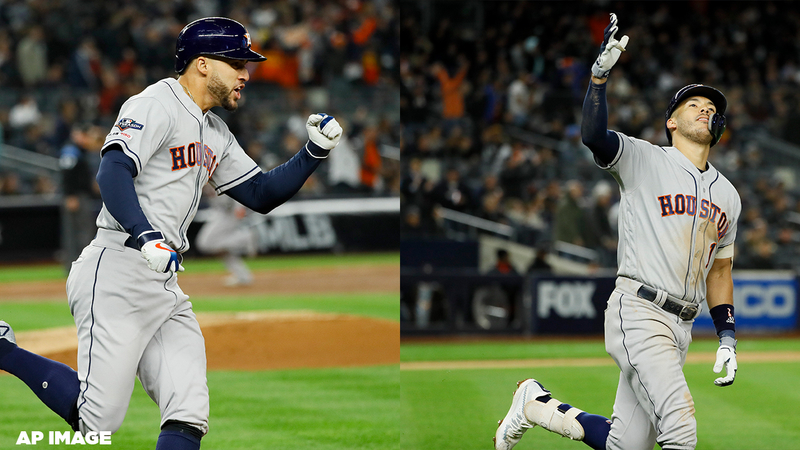 Wind 'swirling' around Yankee Stadium ahead of Game 4

THE BRONX, New York (KTRK) -- With their third straight victory, the Houston Astros are now one win away from the World Series.

Tell your bosses Greg Bailey said this is the work schedule Friday: everyone can sleep in because you stayed up pulling the #Astros through. And you need to leave early because Game 5 starts at 6. Pregame prep and all. #TakeItBack

The Yankees got out to an early 1-0 lead in the first inning as Zack Greinke struggled with his command. Greinke walked three batters and gave the Yankees a free run with his third walk as the bases were loaded.

None of the Astros got on base in the first two innings. Yuli Gurriel, George Springer and Yordan Alvarez all had great exit velocities on their swings, but had no hits to show for it.

The Astros threatened Masahiro Tanaka with a walk from Robinson Chirinos and a single to right field from Josh Reddick.

George Springer took advantage with a three-run home run to left field, pumping his fist as he ran around first base to give the Astros a 3-1 lead in the top of the third. It was Springer's 13th career playoff home run.

The following at-bat, Jose Altuve ran out a slow-moving ground ball to SS, continuing the Astros' momentum. Michael Brantley then had a single of his own to right field, moving Altuve to third base with 0 outs.

Altuve got caught in between third base and home plate after Alex Bregman's ground ball to Tanaka, but urged Brantley and Bregman to continue running. It resulted in Altuve getting tagged out, but Bregman and Brantley moved to second and third base.

Pop outs from Gurriel and Alvarez ended the third inning. Bregman and Brantley were unable to score.

Greinke was pulled in the bottom of the fifth after walking Aaron Judge, putting runners on first and second. He finished the night with four-and-one-third innings pitched, three hits, five strikeouts, four walks and one earned run. Ryan Pressly replaced him.

Pressly then walked Aaron Hicks and the bases were loaded with one out. He got out of the bases loaded jam after striking out Gleyber Torres and Edwin Encarnacion.

The Yankees pulled Tanaka after a single from Bregman. It was hit off the tip of the bat and changed direction at the last second, and DJ LeMahieu was unable to react quick enough.

Alvarez got his first hit of the ALCS and it sent Bregman to third, giving the Astros a chance to extend their lead. Carlos Correa once again had his way with the Yankees with a 3-R HR that extended the lead to 6-1 in the top of the sixth.

Josh James surrendered a two-run HR to Gary Sanchez in the bottom of the sixth that cut the Yankees' deficit to three. Although a runner reached second base after, James did not surrender any more runs.

Will Harris replaced James in the bottom of the seventh and he threw a relatively easy one-two-three inning to send the game to the eighth. Harris struck out two of the three batters.

The Astros threatened to start the eighth inning with a single from Bregman and another from Gurriel, which moved Bregman to third with zero outs. It was the second ground ball that LeMahieu struggled with, and it damaged the Yankees.

Bregman scored after yet another bobbled ground ball from the Yankees infield, this time from Gleyber Torres. Alvarez got the single when it should've been a routine out for Torres.

Robinson Chirinos was hit by a pitch in the elbow, and it was clear Chirinos was in pain after. The bases were loaded and Springer had a chance to add onto the lead, but struck out swinging.

Joe Smith entered in the bottom of the eighth and only faced three batters. Closer Roberto Osuna was called in and forced a quick foul pop-out from Didi Gregorius to send them to the ninth.

Altuve reached second base after another mishap from the Yankees infield. Torres missed a routine ground ball, and then a wild pitch sent Altuve to third. Michael Brantley's single sent Altuve home to extend the lead to 8-3.

While runners were on first and second, Correa struck out and left them stranded.

Osuna was able to finish the deal for the Astros with a quick bottom of the ninth.

Game 5 is Friday, and if necessary, both teams will have to travel directly after the end of that game back to Houston to play Game 6 on Saturday.

As the Astros wait to face the Yankees again in the AL Championship Series, they're hitting the town!