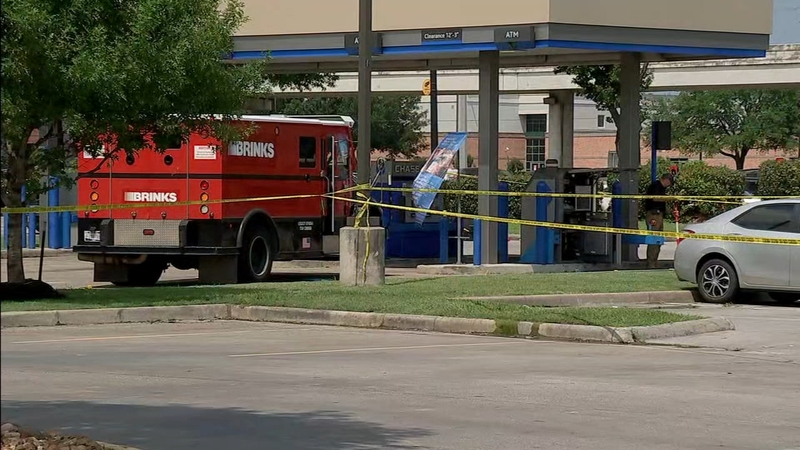 HOUSTON, Texas (KTRK) -- A Brinks armored truck guard was shot in the arm during an ATM robbery that happened around 10:40 a.m. at a Chase Bank in the 10300 block of the North Freeway near West Road.

The guard was taken to a hospital with non-life threatening injuries.

"He was transported to Houston Northwest Hospital and he is in stable condition," said Maj. Susan Cotter of the Harris County Sheriff's Office.
Officials say the ATM was being serviced when the two men ambushed the machine. One suspect held the driver of a Brinks truck at gunpoint, while the other shot the man servicing the ATM.

While the scene was unfolding, an off-duty University of Houston police officer working security at the bank left her vehicle and fired shots at the suspects.

The FBI, who investigates bank robberies, believes the off-duty officer did strike one of the suspects as they fled.

"The UH police officer was able to strike back and we believe there is at least one suspect wounded by her gunfire," said FBI spokesperson Christina Garza.

The men were also firing shots as they left the scene.

Harris County Sheriff's Office officials describe the suspects as Black men in their 20s or 30s. One of them was in a grey sweatshirt, while the other was in a pink camouflaged T-shirt.

Both men were masked and drove off in a black Chevy Suburban.

Three cartridges were taken from the ATM machine, but it's unknown how much, if any, cash was in them.

All of this took place in the parking lot of a busy shopping area, with the scene spreading from the bank to the adjacent Walmart parking lot. Officials estimate the entire scene is the size of a football field.

"It's very bold to be doing this at 10:40 in the morning when there's a lot of activity at this Walmart, as well as other businesses," said Cotter. "Very bold."