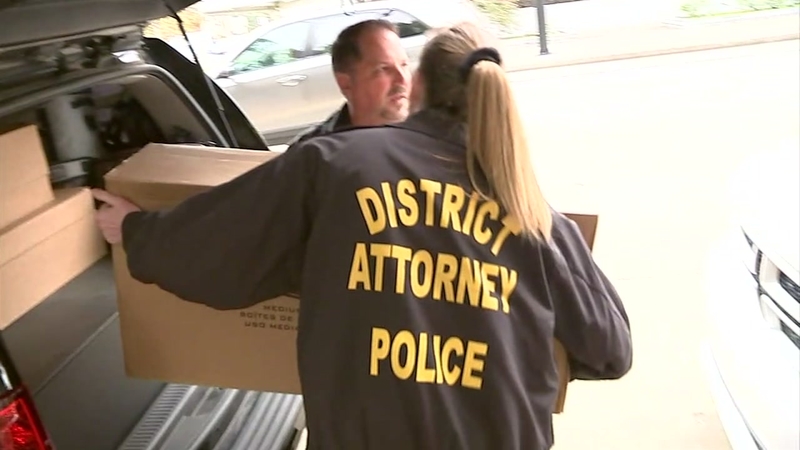 HOUSTON, Texas (KTRK) -- Prosecutors investigating a sexual abuse case against a Conroe priest searched the offices Wednesday of the local archdiocese, which is led by the cardinal who is heading the Roman Catholic Church's response in the U.S. to sexual misconduct.

The intensifying investigation has raised questions about how Cardinal Daniel DiNardo of the Archdiocese of Galveston-Houston and his staff dealt with complaints against Manuel La Rosa-Lopez, who is accused by at least two people of fondling them two decades ago when they were teenagers.

THE LATEST: The search of the Archdiocese of Galveston-Houston has been completed. Investigators just left after 12 hours. https://t.co/lbi7pVgDzw #abc13

DiNardo is also head of the U.S. Conference of Catholic Bishops, leading the American response to the ongoing clergy abuse crisis. He was on site in downtown Houston during the search warrant execution.

WATCH: Who is Cardinal Daniel DiNardo of the Archdiocese of Galveston-Houston
EMBED More News Videos

Montgomery County District Attorney Brett Ligon, whose office conducted the search Wednesday, said authorities were looking for employment records and disciplinary records related to La Rosa-Lopez, along with anything that might lead to the discovery of other potential crimes. Officers from the Texas Department of Public Safety and federal agencies joined the search, Ligon said.

"This is not a search warrant against the Catholic Church," Ligon said, adding: "We're going to go wherever the investigation requires us to go."

A spokesperson for the Archdiocese says they are cooperating fully with the investigation, and issued the following statement:
"This morning, the District Attorney of Montgomery County executed a search warrant for records and information related to an ongoing investigation. The Archdiocese of Galveston-Houston continues to cooperate, as we have since the outset, with this process. In fact, consistent with Cardinal DiNardo's pledge of full cooperation, the information being sought was already being compiled.

The reporting of a "secret archives" is merely a Church term pertaining to confidential documents kept in a secure manner for the protection of the privacy of individuals - not unlike medical records.

Pending additional information or developments, the Archdiocese will have no further comment on this ongoing investigation."

According to a victims' advocacy group, four people have come forward, saying that La Rosa-Lopez sexually abused children while working at Sacred Heart Catholic Church in Conroe in the late 1990s to early 2000s. He's charged with four felony counts of indecency with a child in connection two of those cases.

The victims in the case claim they reported the sex abuse at the time, but that leaders in the Catholic church did not report it to police.

The archdiocese contends this was not a raid and that it is cooperating fully with anything and everything for which the authorities are looking.

La Rosa-Lopez's attorney, Wendell Odom, said the priest has denied the sexual abuse allegations. Odom questioned why prosecutors conducted an on-site search instead of requesting documents through a subpoena, calling it "a little bit alarming."