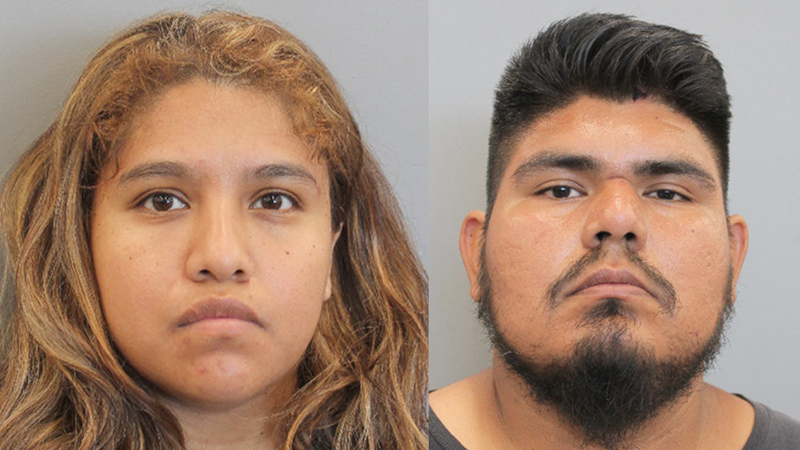 HOUSTON, Texas (KTRK) -- A woman and her boyfriend are facing multiple charges of murder and injury to a child involving her twin 8-year-old daughters.

Soledad Mendoza, 29, is accused of abusing and neglecting her twin girls so severely that one of them died. Her boyfriend, Ruben Moreno, also 29, is facing the same charges. Prosecutors say 8-year-old Melanie Mendoza was not quite 30 pounds, in diapers, and had multiple injuries when she died on Dec. 21, 2020.

"I'm a chief (prosecutor) in child fatality. I see nothing but child fatalities, and this one sticks out," said Assistant District Attorney Gilbert Sawtelle. "Not only because of the nature of the starvation and the torture described, but for how long it went on. This didn't start in Harris County. It started in San Antonio."

Department of Family and Protective Services (DFPS) records obtained by ABC13 show authorities were aware the girls were undernourished, but never appeared to try to take the children away from the mother. Instead, the mother was given parenting guidance, nutritional assistance, and other things aimed at making the girls healthier and gain weight.

According to the DFPS records, the first complaint about possible neglect was filed in San Antonio on Oct. 1, 2018. In May 2019, there were reports the twins were underfed. Then, in August 2019, a report stated the mom wouldn't let teachers give the girls breakfast and lunch at school. The mother apparently told the teachers they were eating at home. However, the girls would search for food in trash cans and displayed other behavior concerning to investigators.

Then, on Dec. 16, 2020, in a report initiated after the mother had moved her family to Houston, a teacher noticed Melanie Mendoza had a black eye over virtual school. Records show a DFPS investigator went to the home, but the mother said Melanie had a fever and was isolating. The investigator never went inside the home. Melanie Mendoza died just five days later.

"The thing that helps prosecution in this case is that the living twin gave an account of what happened in that house, which is horrible, but does give us an idea of what is actually going on instead of trying to guess," Sawtelle said. "She said that Ruben Moreno would beat them with a belt, with a shoe. Mom would kick them, put them in trash bags covering their heads. She would lock them in closets and they would be disciplined for trying to get food."

Prosecutors say Mendoza moved to Houston around early 2020, and it does not appear abuse reports before that time included him. However, it was clear, they say, he actively abused the two girls once everyone lived together.

Sawtelle says the couple had two other kids at home during that time, and they were healthy and apparently well treated.

"Her other kids were fine, and I don't know the answer to exactly why, but when the living twin was asked why, she said it was because 'Mom told us she doesn't love us' and 'We were ugly,'" Sawtelle said.

Prosecutors add, after Melanie Mendoza's death, all surviving children were removed and placed in foster care. They appear to be thriving and will be adopted. They say the investigation took a long time because autopsies on children typically take longer. In addition, there was work that had to be done with doctors and a number of other factors.

Mendoza is being held on $1 million bond. Moreno has no bond on the murder charge. They could appear in court later this week.