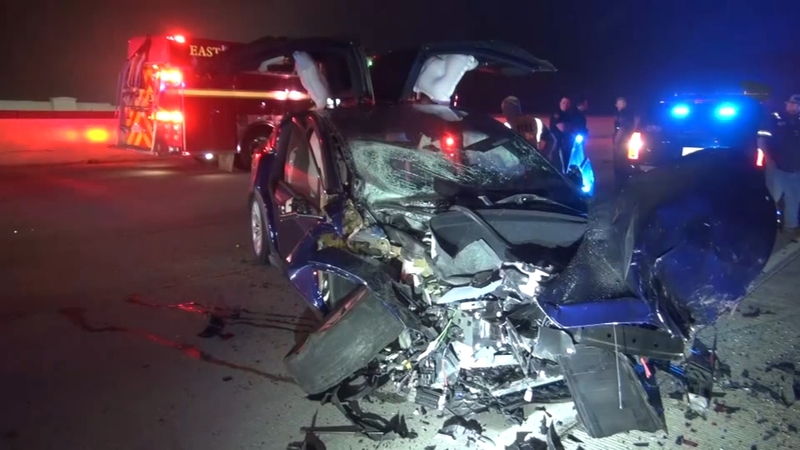 SPLENDORA, Texas (KTRK) -- Five Montgomery County deputy constables were injured Saturday when the driver of a Tesla rear-ended a cruiser during a traffic stop, causing a chain-reaction crash, authorities said.

It happened around 1:15 a.m. on the Eastex Freeway near East River Road in Montgomery County.

While most of the deputy constables' injuries were described as ranging from scrapes to back injuries, one of them may have suffered a possible broken arm, according to authorities on the scene. A K9 officer was also on the scene and was checked out by a veterinarian. None of their injuries were believed to be life threatening.

The driver of the original vehicle that had been stopped was standing on the shoulder of the road when the crash happened and was seriously injured. He was transported to a hospital in critical condition.

One of the deputy constables was conducting a search underneath the engine compartment of a vehicle during the initial stop, according to Splendora police Lieutenant Troy Keller.

"He heard the impact, he held onto the vehicle and was moved with the vehicle," Keller said.

There was no indication the driver of the Tesla slowed down prior to impact and was believed to have been intoxicated, authorities said. The Tesla driver was not injured in the crash and was taken into custody on a DWI charge.

Two of the patrol cars were totaled and three others were damaged in the crash.

The driver of a Tesla crashed into a Montgomery County Pct. 4 Constable cruiser, causing a chain-reaction collision early Saturday.

The incident is the latest in a trend of crashes involving law enforcement vehicles in the Houston area over the past several months and at least the second one this weekend.

In northwest Harris County, a deputy suffered minor injuries Saturday when a suspected intoxicated driver slammed into the back of his cruiser at a traffic signal.

The driver of a Jeep crashed into the HPD cruiser while changing lanes Tuesday morning near Bellaire Boulevard.

Car slams head-on into other vehicle in wrong-way crash