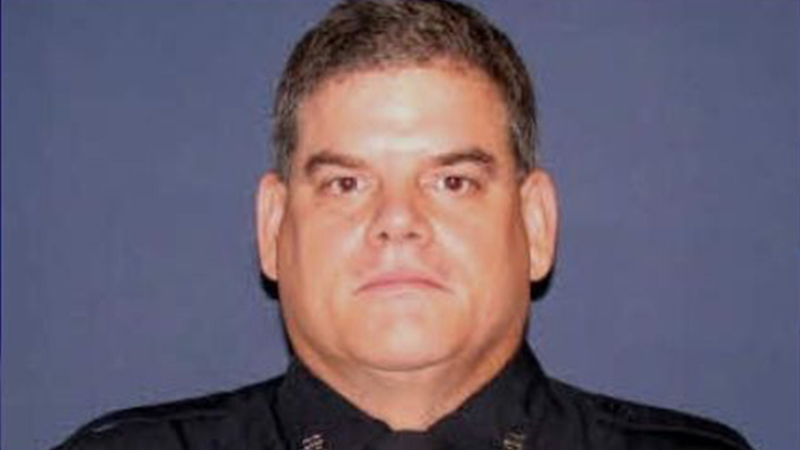 Everything we know about the HPD officer killed on duty

HOUSTON, Texas (KTRK) -- Early Monday morning, a senior officer with the Houston Police Department died while serving a warrant in northeast Harris County, and many knew him as a great man and a great father.

Senior Officer William "Bill" Jeffrey, who was 54 years old, was shot multiple times, including once in the chest, and later died from his injuries.

According to police, Jeffrey joined the Houston Police Department in December 1990. He was assigned to the department's Major Offenders Division. This division routinely deals with dangerous criminals, including accused murderers.

Jeffrey was approaching 31 years of service with the department.

It is with heavy hearts that we confirm the death of Senior Police Officer William "Bill" Jeffrey. He was fatally shot this morning while serving a felony warrant in Harris County. 1/4 pic.twitter.com/63s1VjlXCT

During a joint news conference on Monday, Mayor Sylvester Turner and HPD Chief Troy Finner spoke about Jeffrey and the life he leaves behind.

"Most of us knew him personally," said Finner. "I've known him my entire career."

Finner, who was sworn in as police chief for the department in April, said Jeffrey's wife, Suzanne, recently retired as an officer for HPD last December. Turner said he spoke with her in the wake of her husband's shooting.

"[She said] 'Mayor, the city of Houston lost the very best,'" said Turner of the conversation. "She was very emphatic about that."

The couple had one child and were in the process of building their dream home.

"He's a great man, and a great family man," Finner said of Jeffrey. "Like his wife said, he's one of our very best, and I'm going to celebrate that."

Meanwhile, Sgt. Michael Vance, who was shot multiple times in the leg, remains stable as of Monday afternoon. He underwent surgery at Memorial Hermann Hospital.

Vance has been with the department for 20 years, according to Finner, and is the father of two children. He joined HPD eight years after Jeffrey joined in 1998 and has been a part of the Major Offenders Division for that past two years.

According to police, a photo of Vance will not be released due to the "undercover nature" of his assignment.

The death of Jeffrey marks HPD's fifth on-duty death within the last 16 months. He also marks the 120th HPD officer who died in the line of the duty since 1860.

Before Jeffrey, Senior Officer Leal was HPD's most recent death.

The 36-year veteran died from COVID-19 complications, which was considered an on-duty passing.