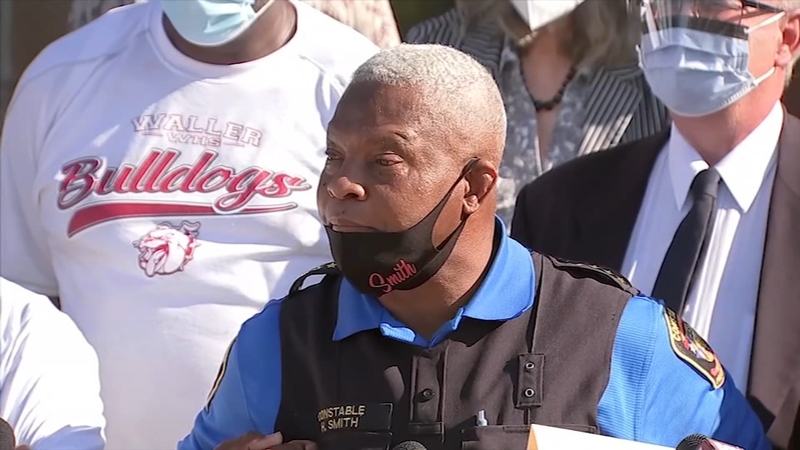 Waller County Pct. 3 Constable Hershel Smith claims deputy constables from Pct. 5 violated his right to due process and used excessive force and unreasonable seizure during a traffic stop on Beltway 8 on Aug. 18.

In court documents filed on Oct. 19, Smith claims Heap called him a suspect in a criminal investigation, which Smith says is defamation because the comments were public.

Court documents from August showed Smith claimed the deputies ordered him out of his service car at gunpoint and handcuffed him. The stop confused him, because of his position as the constable in neighboring Waller County.

Smith, who is Black, claimed the officers who pulled him over were racially profiling him.

Video from TranStar showed the constable in handcuffs.

RELATED: Video surfaces of Waller County constable being pulled over

ABC13 reached out to the Harris County Precinct 5 Constable's Office regarding the incident. Deputies said they stopped Smith because they received a call claiming a person pointed a weapon at other cars and was driving a vehicle similar to the one driven by Smith.

"He's got like police lights," the 911 caller was heard saying to the dispatcher. "I thought I was being pulled over by the police. When I slowed down and I got in the left lane in the shoulder on the left side to get pulled over, he pulled up next to me and pointed a gun at me and was yelling stuff at me and drove off."

According to deputies, Smith told them he had flashed his lights at a person who was driving too fast. Smith later said the driver cut him off.

"When he cut me off and did the thing he did, I hit my lights to try to protect everybody else around," Constable Smith said.

Heap said his deputies received only the make of the vehicle involved and the license plate from dispatchers, but no description of the driver was given.

"They conducted a high risk traffic stop," he said. "Why? Because we know there is a weapon involved."

He said he reviewed the body camera video Wednesday and his deputies' behavior did not raise concerns for him.

Smith was put in handcuffs on the shoulder of the Beltway for a minute and 47 seconds before he was released, according to Heap.

Smith said he felt like the deputies should have known he was law enforcement before pulling him over. He turned on his lights during the traffic stop and said they should have checked his plates before pulling their guns and escalating the situation.

According to Heap, his deputies did run the license plate and the car Smith was driving was registered to Enterprise Holdings. Records did not indicate that it was a Waller County patrol car.

In June, Smith's vehicle was reported as suspicious by another law enforcement agency, Heap said. Smith said he has had the car for about eight months.

Ultimately, Smith said this boils down to prejudice on the part of the 911 caller and Harris County Precinct 5 constable deputies. He said this speaks to a bigger problem at Precinct 5 and policing in general.

He wants an apology from Constable Heap and he wants the deputies to receive more training.

"Constable Ted Heap, call him and ask him why he hasn't called the constable," Smith said. "No apology from the deputies or anything."