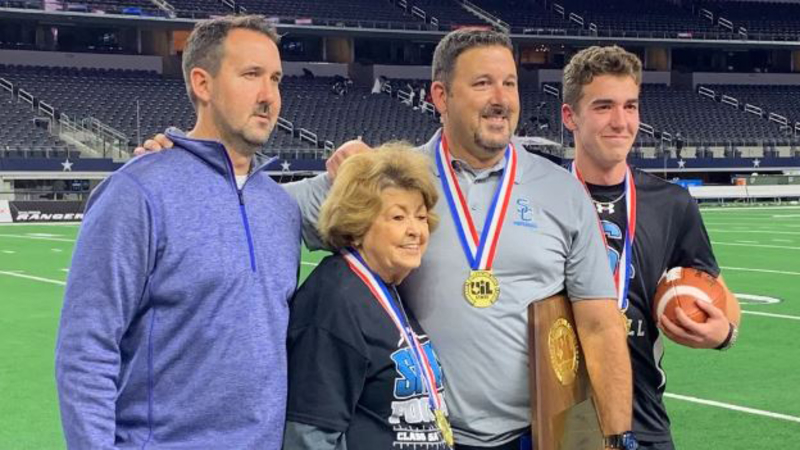 A LOOK BACK: Shadow Creek HS perfect so far in 1st varsity season

ARLINGTON, Texas -- After the final pass had fallen to the turf, the medals draped around their necks and the trophies awarded; standing in the end zone of AT&T Stadium was the Butler family.

Brad Butler had just led his program to its first-ever state championship. As he finished with interviews he walked to the end zone, the trophy resting in his left hand, to greet his mother, Jo.

The two embraced. A tear could be seen rolling down Jo's cheek as they hugged and shared a moment.

"She goes 'Your daddy knocked that ball out at the end'," Brad said with a chuckle about what they said. "'I said he may very well may have mom."

Last year, Brad's father Tom didn't get to make the trip to AT&T Stadium for Shadow Creek's inaugural to the title game. The family had just found out he was battling cancer and he couldn't make the trip.

You can view more of this article through our partners at VYPE Houston.
Report a correction or typo
Related topics:
sportsvypefootballhigh school football
VYPE
How a flute player is 1 of the best softball pitchers in Texas
Houston area schools impacted by UIL realignment
Head football coach and wife open up about fertility struggle
VYPE's Houston Fab 40: Class of 2021
TOP STORIES
How a penny-sized 'Glock switch' can turn a handgun into an automatic
Union Pacific addresses issue of stopped trains blocking roads
Daylight shows home destroyed after standoff with shooting suspect
What we know about man accused of shooting 3 HPD officers
Widow delivers heart-wrenching eulogy for NYPD detective
Suspect arrested after 30-minute chase ends on I-45 in Texas City
Rainy Monday and arctic cold front on the way after sunny weekend
Show More
5 people charged in connection with Pct. 5 corporal's murder
How many times can I reuse my N95 mask?
Decades after TV anchor disappears, convicted rapist denies connection
Driver dies after slamming into 18-wheeler's trailer on US-59
Woman shot in the shoulder during robbery set up in SW Houston
More TOP STORIES News