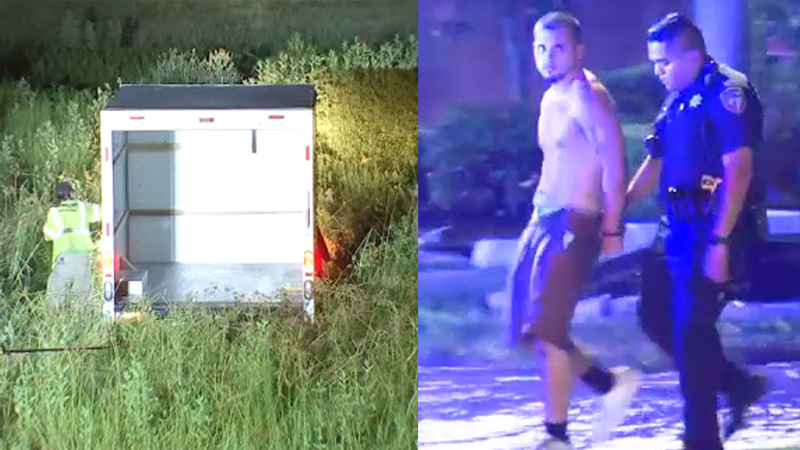 CYPRESS, Texas (KTRK) -- A man who allegedly tried to steal a U-Haul truck ended up plunging it into a pond in Cypress, deputies say.

It happened just north of West Road near Greenhouse at around 3:00 a.m. Wednesday.

The Harris County Sheriff's Office says they received reports of a burglar on the property of a nearby U-Haul location.

As deputies were arriving, they found the U-Haul truck, but the suspect drove off. The suspect led deputies on a chase down West Road before going into a neighborhood.

He then lost control and plunged the truck into what appeared to be a retention pond near Langham Creek. Deputies say the truck went down about 100 ft. in the water.

The suspect ran away but was found shortly after hiding in a pool house in a nearby home on North San Gabriel River Circle and West Pedernales River Drive.

ABC13 spoke with homeowners who live next door and say their security cameras captured the man running through the backyard. They say the suspect even drank a couple of Coca-Cola sodas while he was inside.

Deputies say the suspect is charged for stealing the truck and evading officers.

ABC13 also spoke with the manager of the U-Haul storage facility. He could not comment on what happened, per corporate policy.