'Not there yet:' Two years later, Houston, county lag behind state in Harvey recovery efforts 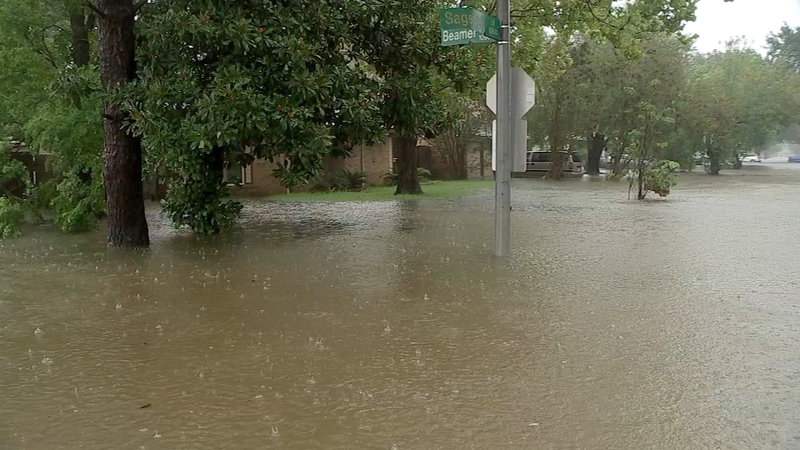 HOUSTON, Texas (KTRK) -- Nettie King was in second grade when her family moved into a newly-built one-story house in the 1950s.

They took good care of the La Marque home, using old newspapers to clean the windows and screens before eventually replacing them with white storm blinds. It was rare for water to get in but when it did, she and her siblings did what kids do.

"We played in it," she recalled.

Decades later, King said she remembers the house rattling amid relentless rain and thunder on Aug. 25, 2017. Still, she went to bed and woke up the next morning to a phone call from her neighbor who wanted to know if her home flooded.

It did. The water was up to her knees and with electric cords submerged, she was afraid to move. Her furniture started soaking up the water as the wooden floor began buckling and her whole house started to smell.

"I did a lot of praying during that time," King told 13 Investigates. "I kept praying and asking God to bless me with a house because I couldn't afford to take care of that myself, even though I had homeowner's insurance."

In December 2018, when the Texas General Land Office started accepting applications for its Homeowner Assistance Program, King's caseworker made sure she was among the first in line to officially apply. Within six weeks, her application was approved and on April 12 she moved into her newly built home.

On Thursday, the GLO celebrated its 100th home built for Hurricane Harvey storm victims across the state.


In Houston, the city is operating its own $1.2 billion federally-funded program, but so far only one Harvey victim has received keys to a rebuilt house. That homeowner told 13 Investigates she received the keys Friday, but that the city won't move her furniture until early September.

"The further and further we get out from a storm, folks do move on to other things," Lagrone said. "They either take care of their own business or they relocate elsewhere or they give up on the house (and) you will see applications naturally start to taper off."

Statewide, more than 900 homes are under construction or approved to start building through the GLO's program, which is designed to help victims in 48 counties impacted by Harvey.

The GLO granted Houston and Harris County the ability to run their own disaster recovery programs to help storm victims locally, but hundreds of Houstonians say they're still waiting for aid.

In late July, the city's housing department said its goal was to help 75 families by the end of August. But as the two-year anniversary of Harvey nears, Houston has only approved 36 applications.

When 13 Investigates' Ted Oberg asked about the progress, Tom McCasland, director of the city's Housing and Community Development Department, acknowledged, "we're not there yet."

For months, 13 investigates has asked the city for updates regarding the number of people they've helped and if ICF Incorporated, the group hired to do outreach and case management for the city's recovery program, is meeting its benchmarks. Through our own crowdsourcing efforts, we've heard from hundreds of residents wondering where their applications stand. Now, the city says it is making changes to help speed up the process.

"There was some pace and quality concerns in May and June that we have addressed," he said. "One of the ways we've addressed that is by hiring our own staff directly, making sure that we are taking advantage of the resources that we've had over the last year and moving that pipeline."

On Monday, seven new housing specialists joined the city's team. In June, the city got rid of the deputy director specifically hired to run the disaster recovery program. 13 Investigates reached out to her, but neither she nor the city will say why.

McCasland told city council Tuesday that he is also ending the contract with APTIM, the private company hired to be the program manager, saying that its contract ran out. APTIM has already been paid $4.6 million and has invoiced the city up to $14 million for their role in the slow-moving program.

The city will review APTIM's work prior to paying those invoices and will not issue checks for any work that was not completed to standards, McCasland said.

"They don't get paid unless we can get reimbursed," he told council.

Longtime South Park resident Emma Wood looked on as a large construction vehicle clawed into the roof of her home on July 31.

"Bye, house," Wood says in a video the city posted on social media. "Sad that it's gone. Just looking at it ... it kinda makes you feel funny. It ain't gonna be there no more after all these years."

Wood has lived in that house for decades. On Friday, just shy of Harvey's anniversary, the city said Wood was the first program recipient to move into a rebuilt home.

Although Harris County and Houston are running their own recovery programs, all of their applications go through the GLO for final approval, which has proved difficult to get as applications are sent back due to missing or incomplete information. Both Houston and Harris County have contracts with ICF, who is helping manage their programs. We reached out to ICF to ask why applications are being kicked back as incomplete, but they didn't respond.

Harris County says it began accepting pre-applications soon after the storm, but its contract with the GLO wasn't executed until this February.

The county says more than 5,000 people responded to its survey and about 3,900 have been invited to apply to its program. As of Friday, there's 123 completed applications, the majority of which are still awaiting an eligibility review.

The county has only sent 11 applications to the GLO for final approval and five have been approved.

In Houston, the city has submitted 97 Homeowner Assistance Program applications to the GLO for approval. More than half of those applications - which were vetted by a private contractor paid millions in taxpayer money - were kicked back because they were deemed incomplete or needed more information.

Unlike the GLO's program, where applicants can determine whether or not they want to apply directly for aid, Houstonians are required to first fill out a survey. Based on the survey results, they are then invited to apply or deemed ineligible.

Of the 19,642 people who filled out Houston's survey, the city says 4,919 have been invited to apply. And, only 40 percent of those invited have completed their applications. 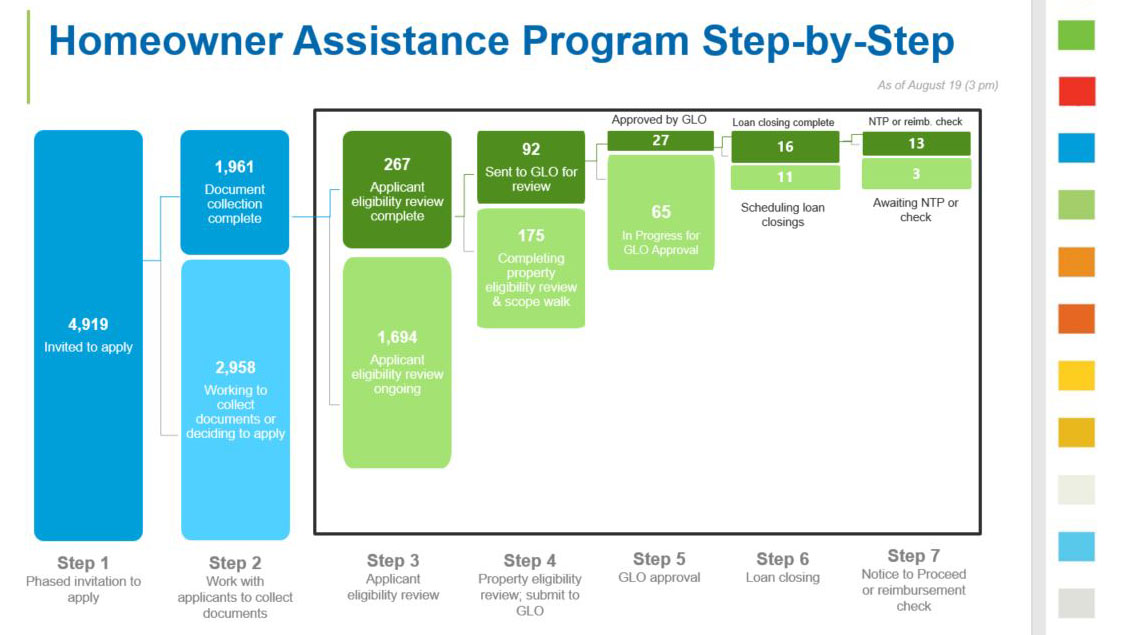 Lagrone said the first two and a half years following a storm is typically when recovery programs see the biggest number of applicants. That means the final round of residents seeking help are expected to apply within the next six months or move on from the process.

"Then it becomes a little bit harder to get folks to apply," Lagrone said. "The availability of information to fill out that application is a little harder to obtain."

She said the GLO anticipates building or approving construction for its 1,000th home by the end of the year and is on pace to hit that target.

Two years after the storm, Lagrone said Houston and Harris County are just now ramping up their program, so it's too soon to say whether or not they'll hit their targets.

The city hasn't met the goals McCasland told council it would when approving contracts with the private companies operating Houston's program.

Meanwhile, interest from residents is expected to die down and if any of the $5 billion Harvey recovery aid dollars allocated to Texas goes unspent, future requests for funding from the U.S. Housing and Urban Development may not be as successful.

"The allocation is a six-year allocation and if we don't spend these monies within six years, we are definitely in jeopardy of losing these funds and these recovery potential dollars for the state of Texas," Lagrone said. "We only got 10 percent of what we needed in the first place (and) we definitely will get hit again and as Congress is considering allocating funds, as HUD is doing the formula to allocate monies to us, that will be in the back of their mind that the state of Texas returned funds."

In Houston, McCasland said there have been concerns with the quality of applications in the last few months, so he is stepping in to do final reviews to make sure they're not returned as incomplete.

Houston Mayor Sylvester Turner said he believes allowing the staff to handle more operations internally instead of relying on a contractor for the entire process will lead to quicker results.

He is hosting a Harvey Recovery Town Hall from 6:30 to 8:30 p.m. Thursday at the Fifth Ward Multi-Service Center at 4014 Market Street. There, the city says residents can learn and ask questions about housing, flood mitigation projects and infrastructure repairs.

Currently, McCasland said homeowner's applications are getting held up in the inspection stage. He is requesting the city approve a general services contract with a private company that can perform lead, asbestos, mold and general inspections costing anywhere from $1,000 to $3,000 a piece, depending on each home's needs.

"We've got two nearly 2,000 files in the pipeline and as long as we can get the inspection services ready to go, they are moving forward," McCasland said.

Up until this point, though, Houston's program is far behind the state's. McCasland said the state had a six-month headstart. Based on records, though, the GLO began accepting applications in December and the city started in March, leaving only a three-month lead.

When asked if any of that matters to the homeowner, McCasland said, "it doesn't."

With aid going out to 48 counties across the state, Lagrone said word-of-mouth can be vital in keeping people interested in potential aid.

"Once we start putting people in the houses, that definitely gives that legitimacy to it and we do see an uptick in applications after that first unit goes on the ground in that community," Lagrone said. "They do realize that it is a real program and it is something they could potentially benefit from." 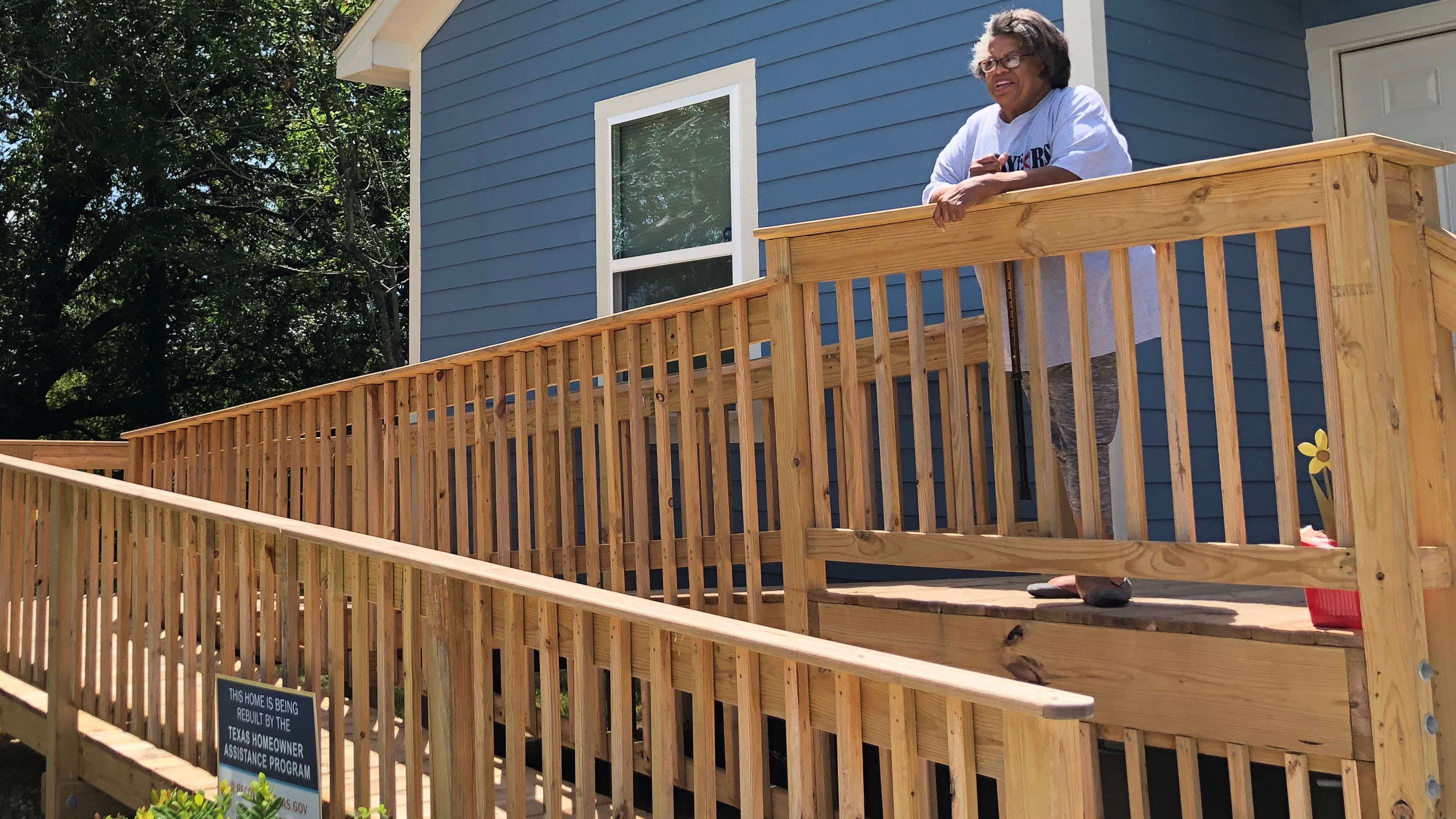 In a brightly colored flower bed next to the wooden ramp leading to King's elevated home, there's a sign that reads, "This home is being rebuilt by the Texas Homeowner Assistance Program."

The work is done, but King said she plans to keep the sign up to bring hope to others that help is available.

"Whatever they ask for, give it to them. The sooner you get it to them, the sooner they can help you," she said. "Don't stop praying and just be patient."

Have a tip for Ted Oberg? A problem to solve? Get in touch with us on our tip page, or send a tip below. (On mobile? You can open our form by tapping here.)
Report a correction or typo
Related topics:
houstonted oberg investigatesfloodinghome repairshurricane harveyhurricane
Copyright © 2021 KTRK-TV. All Rights Reserved.
TED OBERG INVESTIGATES