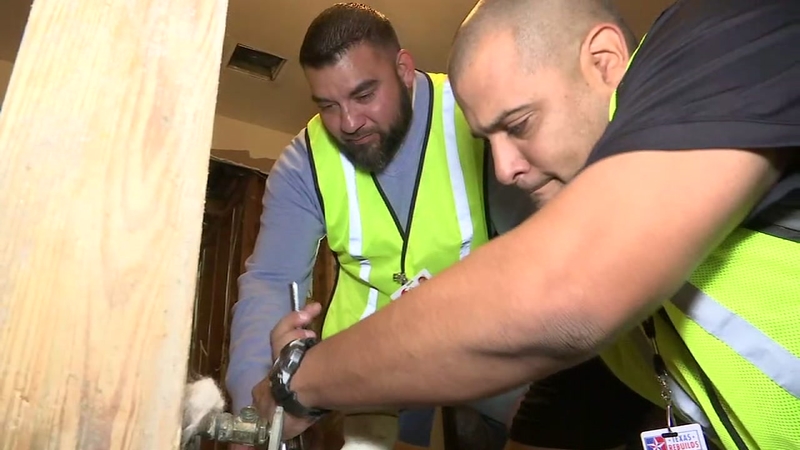 For the next two months, construction work will take place around the Houston area.

On Thursday crews were cutting, and installing insulation, and fixing damaged pipes.

It's an emotional project for Andrea McNabb.

She didn't have the money to get this done herself.

But now she doesn't have to worry.

Thanks to a government program, she's getting $15,000 of repairs for free.

At first, McNabb couldn't believe the phone call she received.

"I'm going, really, McNabb said. "What kind of gimmick is this?"

It's no scam, but many think it is.

The Texas General Land office says it's contacted more than 60,000 people about the program.

The agency would like more, which is why it's trying to tell neighbors they can get a lot of work done.

In order to qualify, neighbors must have applied to FEMA.

If the agency determined their home received no more than $17,000 in damages, you could be qualified for what is called the PREP program.

"We're allowed to do partial repair and essential power, so that we can designate so they're living in their home, in their community again," Phillips said.

Phillips said some are opting out because they've already done the work.

Houston man, Hollis Wardell paid to have his home raised.

He was also able to take advantage of the PREP program.

But on Thursday, Texas officials had a message for him.

"It is our intent to have a reimbursement program," Phillips said. "So folks who have tapped their own savings, or their 401K, if they have receipts, we will be reimbursing them up to a certain level."

It's not a done deal, and the Texas General Land Office doesn't know how much homeowners could get back.

But there will be meetings in Austin Friday about the proposal.

"We're executing short-term now, but we haven't forgot about that long-term," Phillip said.

The deadline to apply for FEMA aid has passed, but the appeal process hasn't ended.

If you're interested in the PREP program, and were denied, state officials urge you to appeal.

And if you received a call, text, or email about the PREP program there's still time to get help.

Crews will be repairing homes for another two months.