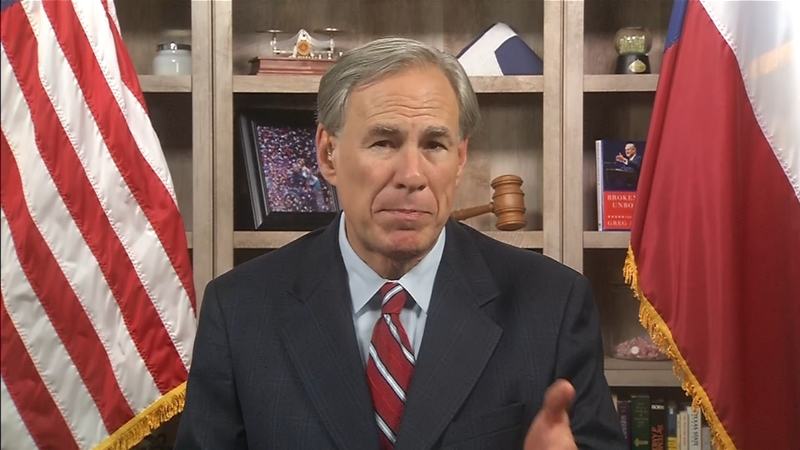 HOUSTON, Texas (KTRK) -- In an exclusive interview with Texas Gov. Greg Abbott, he told ABC13's Melanie Lawson that his team is sorting through thousands of bills that are waiting for his signature.

The first question had to do with his decision to call a special session. It came in the wake of a walkout by Democrat lawmakers in the final hours of the regular session. By leaving, they kept the Republican majority from a quorum or without enough members to pass laws for stricter voting.

"What do you say to critics who say this makes voting much harder for minority and older voters, and even the disabled?"

Abbott responded by saying that there's been a lot of "confusion and uncertainty" about the proposed voting bill, and that it actually allows for "more hours to vote." He went on to say, "if Senate Bill 7 or the election integrity forum bill passes, there will be more hours, not fewer in comparison to current Texas law. But Melanie, also know this, the hours that are allowed in the state of Texas are far more than so many other states - let's just compare it to the president's home state of Delaware, where they have zero days of early voting, we have more than 100 hours more of early voting than what they have in Delaware."

He added, "people should not say that Texas is being discriminatory by the abundant hours that we provide for early voting."

The governor did make one concession about continuing the practice in Black churches of taking their members to early voting on Sundays, saying, "last night, I agreed that one modification to the way the bill was drafted, would be to increase the voting time period on that one Sunday for early voting, and I think you will see that in the final product."

ABC13 asked him about his plans to call two special sessions this year, including one in the fall to address redistricting and federal funding on COVID-19.

When asked on whether he still plans to withhold pay to Democrat lawmakers who walked out and whether that will hurt legislative staffers more than lawmakers, he wouldn't give us a definitive date.

"Those are decisions that will be made in the coming days," he said. "(I) would ensure that lawmakers do have the ability to restore payment for the legislative branch of government."

What's happening with the state's power grid and what can be done to prevent another crisis like we had in February, when so many Texans were left without power and dozens lost their lives?

Lt. Gov. Dan Patrick has said he wants to use part of the special session to work on helping to fix the grid system, and to assist power customers to deal with exorbitant bills. But Abbott said the issue was "addressed very substantially during the regular session," and claims that "the Texas power grid is far better today than it's ever been in the history of the state."

"(I've) added accountability for ERCOT, the Electric Reliability Council of Texas, in charge of the grid, as well as additional accountability for the Public Utilities Commission (PUC)," Abbott said. "Second, we impose what's called weatherization, which includes winterization in the wintertime and summerization in the summertime, to make sure that all of the entities involved in transmitting and processing power in the state will be weatherized so that they wouldn't shut down in a winter storm like what we had this last time."

Abbott said that "during the winter storm, downtown Houston lights remained on, as well as the hospitals remained on. However, because of the shutdown, they actually shut down power generating facilities in the state of Texas, and because they were not protected from the grid shutdown, that actually prolonged the shutdown. That will not be permitted and no power generating facilities will be shut down in the future."

Finally, he said, "we have enforcement mechanisms in place to enforce penalties for those who do not comply, and I can tell you today, we have more power generating capacity than ever before."

When asked about whether this would help customers with their bills and not just aid the power companies to upgrade, he said, "so part of what was done during the session absolutely will help power customers and reduce their bills. Is there more that we can do? Yes there is, and am I in favor of doing more, yes I am."