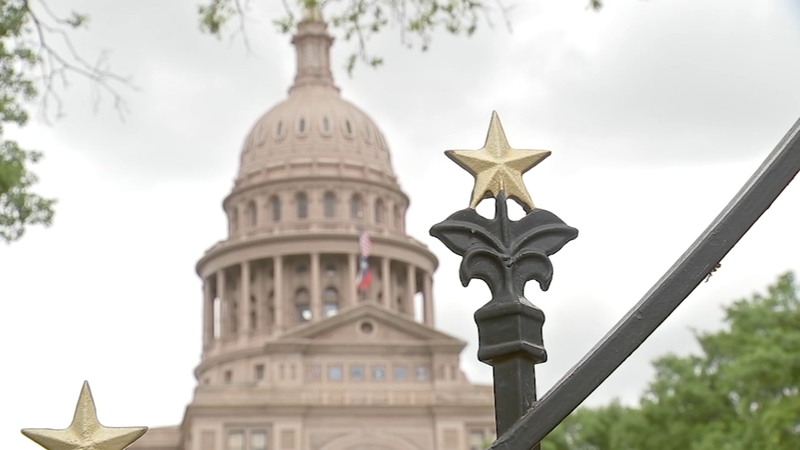 TX Lt. Gov. on riot threats: 'We're not going to be outflanked'

AUSTIN, Texas (KTRK) -- The Texas capitol grounds reopened on Monday with a visible presence of increased security, after closing on Wednesday within hours of thousands of people storming the U.S. capitol.

Officers from both the Department of Public Safety (DPS) and the National Guard stood in front of the state capitol building on Monday, as government leaders inside worked to secure the state while maintaining the right for Texans to gather in peaceful protest ahead of the start of the next legislative session on Tuesday.

"Of course, on opening day, we're going to be at our best," Lt. Gov. Dan Patrick told ABC13. "We're not going to be outflanked or outnumbered. We will be prepared for any and all circumstances. But I have total confidence in DPS, and we'll do our job tomorrow."

Speaker of the House Dade Phelan also reiterated his commitment to working to ensure the safety of all elected leaders while addressing concerns from all constituents.

"Demonstrations are an important part of democracy," Phelan said. "We want to hear from individuals who are upset or happy. We welcome them to our Capitol. We just ask them to be respectful."

Texas Gov. Greg Abbott also said the protection installed at the Capitol was exemplary, saying, "Texas Department of Public Safety always remains on top of and they will continue to remain on top of (ensuring capitol safety)."

Lawmakers in Texas saw what happened in Washington D.C. last week when deadly riots erupted on the Capitol steps and spilled inside. Many have said they condemn it and recognized it adds another layer to an already complicated 2021 legislative session.

Lt. Gov. Patrick said, on Saturday, he had enough "enough" of blaming Antifa, who "wears face coverings obscuring their identity," for the riots, but instead a small group of "Trump supporters" who don't represent the majority were responsible.

In the only sit-down interview with a Houston station ahead of the new legislative session, Texas Lt. Gov. Dan Patrick addresses security at the State Capitol and his call to respect the result of the presidential election in the wake of the Washington D.C. riot.

Phelan recognized the challenge ahead, as more armed protests are planned in all 50 states, according to an FBI Bulletin.

"Now, we have, what can best be described as, more civil unrest that could occur in the Capitol this week or next week," he said. "But I'm hopeful it's not. I'm hopeful we're going to have a peaceful opening day (Tuesday)."

Abbott, during a tour of a COVID-19 mega site in Arlington on Monday, said, "The people responsible for the violence are the people who did it...the ones who should be punished for it," urging the U.S. Congress to stop "political infighting" and work harder to increase COVID-19 vaccine distribution.

SEE ALSO: How many COVID-19 vaccines have been given out in your state?

Regardless of last week's events, the signs of the present times are still present everywhere at the Capitol. From the extra security for possible protests to the hand sanitizers to prevent COVID-19 at every desk in the Texas House chamber, Phelan described it as a one-of-a-kind legislative effort.

"We have not operated, not in my lifetime, not in 102 years has the Capitol operated under a pandemic," he said. "So that will be a blanket over all of the session. We want to have social distancing in committee rooms and in the gallery. We want to make certain if we need Plexiglass in the committee rooms, we'll have that as well."

Phelan, who is a Republican from Beaumont, said the priorities on the list for Tuesday are the budget, redistricting and making sure that members stay safe. It is up to them whether or not they or anyone visiting with them are tested each day at the Capitol's rapid testing tent.

In the only sit-down interview with a Houston station ahead of the new legislative session, presumptive Texas House Speaker Dan Phelan talks about the challenges presented to lawma

In the Senate, the testing will likely be mandatory. But Lt. Gov. Patrick says he wants this to be as open a session as possible.

"My number one goal is to keep the public safe when they come here, keep the employees safe and to keep the members safe," he said. "We're not keeping the citizens out like most Capitols. But if you're coming, come to testify on a committee, come to visit with a senator. This is not the year to come on a tour."

Gone is the traditional ceremony of the first few weeks of the session, and access to the chambers is limited. The real work begins in February with balancing a budget, funding education and legislative redistricting.

Committee meetings and floor sessions will be in-person instead of online. Both chambers will pass their rules later this week. The regular session lasts 140 days.