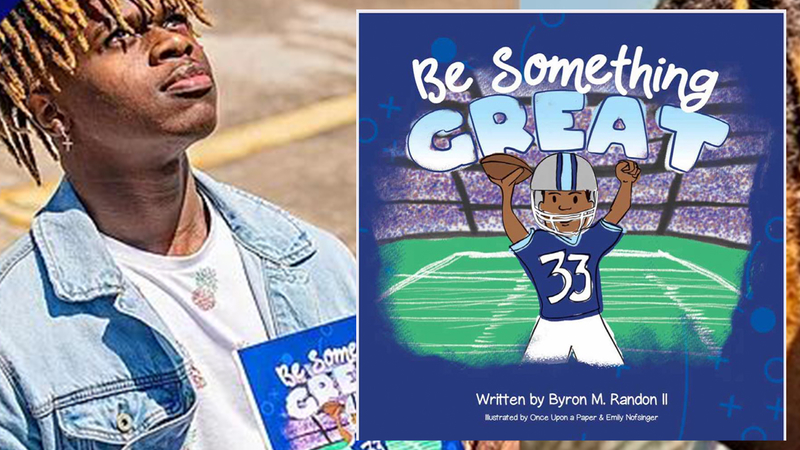 SWEENY, Texas (KTRK) -- A high school football player's inspirational project during quarantine has made him a hero.

Byron Randon wrote a book during his time in isolation to give young people hope and motivation for their future.

The 17-year-old senior is a captain on the Sweeny High School football team. He's considered a powerful outside linebacker and a person his teammates can truly rely on. The road to get there, however, wasn't easy.

"I went through a little bit of trouble, petty trouble and had to transfer schools sometimes," he said.

When he started playing football in high school and was in danger of failing a grade, something clicked. That's when he turned things around. He looked to his village of teachers, parents, coaches and pastor.

"We see the news all the time [of] people doing so many crazy things," said Roland Hendricks, the senior pastor at Greater Zion Baptist Church in Brazoria. "Shooting up, drugging up, smoking up, doing whatever they want to do. I don't think he wanted to be a part of that. He wants to be an asset, so he can make a positive impact."

Just like his mother suggested, Randon wrote a book about his journey and called it "Be Something Great."

Now, kids all across Brazoria County are reading his encouraging words to reach for the stars and never settle for the label put on them.

"You look back at second grade, you would think, 'Byron Randon actually wrote a book? Byron Randon is doing as well as he's doing?' Because at that time, he didn't have self-esteem in himself," said the teen's second grade teacher, Alice Franks. "He didn't think he could do it, but anything is possible."

Randon is proof of that, and he is now an inspiration to not only young people in the area, but the people who believed in him before he believed in himself.

"It was there. He had to just realize it was there," said his English teacher, Samantha Rakowitz.

"It makes me even more hopeful for our future knowing that we have young men like him ready to lead other young men," said his fifth grade teacher, Garland Johnson Jr.

Meanwhile, Randon's teammates, and even opponents, have joined him in passing out his book and visiting young kids.