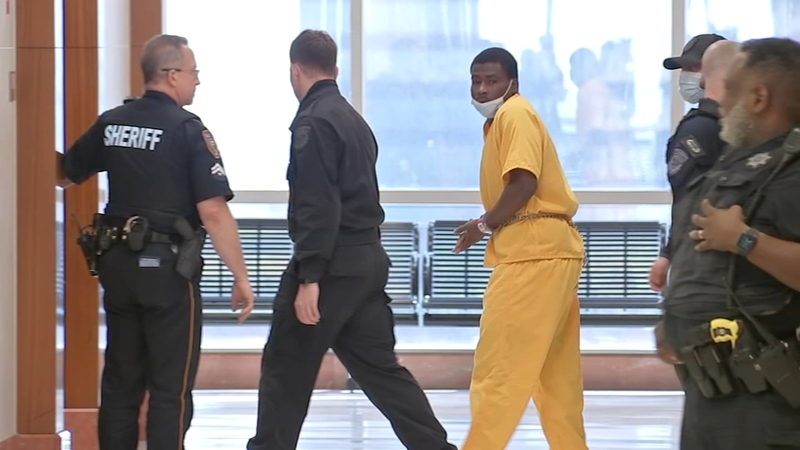 On Tuesday, District Court Judge Robert Johnson ordered Joshua Stewart, 23, and Fredarius Clark, 19, to continue to remain in jail with no bond.

A third defendant, 17-year-old Fredrick Tardy, is not eligible. A bond hearing for him was re-set for Wednesday morning.

All three are charged with capital murder. The Harris County District Attorney's Office announced they will seek the death penalty for Stewart and Clark. Tardy is too young.

During what's called a Proof Evident hearing on Tuesday, the state played a graphic surveillance video showing the deputy's death and called witnesses to establish why they believe Stewart and Clark should not be given a bond.

According to law, they had to show the court that they had the proof to secure a guilty verdict and a death sentence and that the defendants pose a future danger to society. They have been in jail since their arrests in early April.

Almendarez was shot to death on March 31. He was off-duty and shopping with his wife when, investigators say, he caught the three defendants in the act of stealing his truck's catalytic converter. There was an exchange of gunfire and Almendarez, a 23-year veteran of the department, was killed.

In court, prosecutors also showed surveillance video of a shooting two weeks before Almendarez's death that they say involved the same defendants doing the same thing. The victim in that case, who survived, testified and identified Stewart as the shooter.

And it was the first time, the deputy's relatives saw the surveillance video of his death. At times, they had to step out of the courtroom. His brother told ABC13, that the video was hard to watch, but he needed to see it.

"There were so many other stories going around as to how many times he was shot, what happened, who he was wrestling with," explained Steve Almendarez. "It was good to see for myself because now I know what really happened. If anything, he went down fighting and I've seen that. He did his job, all the way to his last breath. He took criminals off the street."

Before the ruling, Stewart's relatives were removed from the courtroom for reacting to testimony when they had been warned against it, authorities say.

Tardy will be back in court Wednesday morning.