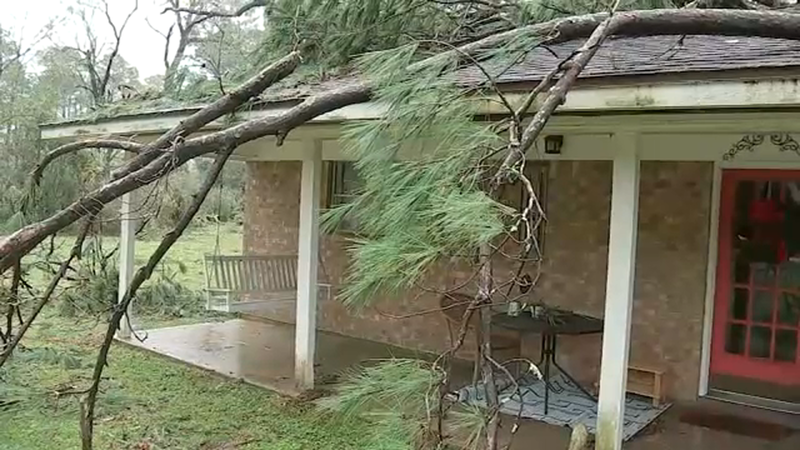 'It was scary': Kingwood man describes tree fall on home during storm

KINGWOOD, Texas (KTRK) -- Several residents in a Kingwood neighborhood shared with ABC13 that they experienced possible tornado damage to their homes, powerlines and trees.

Multiple neighborhood blocks along and near Hamblen Road were cleaning up debris from snapped trees and wind damage to their homes Sunday afternoon.

"Within a minute or two," Reynolds said. "I mean, we got in the hallway and it was coming."

A tree crashed into Reynolds' home, causing both structural and water damage.

"We tucked down in the hallway and just heard the boom of the tree coming down," Reynolds said. "One of our windows shattered from the wind or the tree, I'm not real sure. It was scary. I'm not going to lie. It was scary."

John Bird, a resident who lives two blocks away from Reynolds, said his grandson was visiting with his wife and twin girls. Bird said trees fell on his grandson's vehicle and totaled the car.

"It wasn't this bad when we've had hurricanes in the past," Bird said, describing the tree damage throughout the neighborhood. "We're glad we're OK."

As of Sunday evening, there were no reports of injuries or weather-related deaths in the Kingwood area.

A resident said they estimated it could take a couple days to about a week to clean up all the debris.

Avery Terry, along with her neighbors who were awake, described strong winds as the storm swept through the area. A tree also fell through the roof of her family home.

"Everything just started shaking," Terry said. "We were in bed and it was vibrating our bed (and) the windows. It just hit so fast and so quick, and then it was gone. It was very, very loud and pretty crazy."

Houston police were called out to help traffic control Sunday afternoon as neighbors assessed the damage and started the cleanup process. Power company crews were also working to restore power to the neighborhood.

While dozens of homes experience damage in the Kingwood area, other neighboring streets appeared to be untouched.

"The most important thing for me is that everybody was safe," Reynolds said. "This can be fixed. We'll be good."