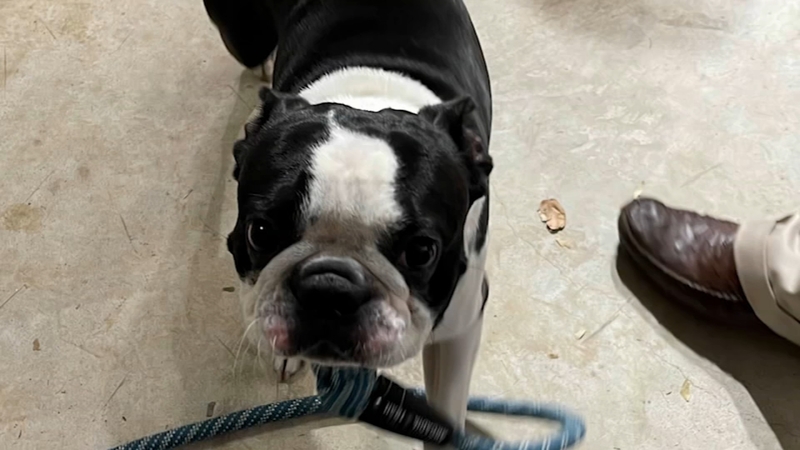 Dog stolen from owner's car has been returned

SPRING, Texas (KTRK) -- Just days after a beloved pet was snatched from his owner's vehicle on Christmas Day, they have been reunited, thanks to some quick investigative work.

A Boston terrier named Yogi was on his way to Christmas dinner with his owner Danny Thomason in Spring when Thomason stopped for gas.

Thomason was filling up his car at 535 FM 1960, and he said he left his dog in the car while he went inside the store to pay.

"It was gut-wrenching," Thomason said. "It was like one of my children had just been kidnapped."

Thomason said he reviewed the surveillance footage from the gas station, which confirmed his 5-year-old dog Yogi had been stolen.

"I saw the dark Chevrolet truck drive beside me, and the guy got out and put Yogi into his car and drove off," Thomason said.

But thanks to an investigation by the Harris County Sheriff's Office, Thomason and Yogi were reunited amid tears of joy on Monday.

Proactive Auto Theft Unit investigated a theft of a dog from a car that happened on Christmas Day. A vigorous investigation led to the location and recovery of the dog. The dog was reunited with the owner, who shed tears of joy. This is community service at its best. pic.twitter.com/Uz3HWTeQTt

There's no word if anyone has been arrested or charged in connection with the case.
Report a correction or typo
Related topics:
pets & animalsspringpetdogdogs stolen
Copyright © 2022 KTRK-TV. All Rights Reserved.
DOGS STOLEN
Suspect in Lady Gaga dog walker shooting released from jail by mistake
Dog with special meaning to her owner now missing after SUV stolen
Mom fears son's killers may not be charged in shooting over stolen dog
Boston terrier stolen from car while owner stops for gas in Spring
TOP STORIES
'It was like a mad dash:' Clear Creek ISD senior set to graduate
Man dead after being shot during road rage incident, HCSO says
CDC recommends wearing masks indoors, ahead of Memorial Day weekend
Scattered storms move in tonight ahead of front
Murder suspect dead after found unresponsive in cell, sheriff says
Astros fan from Spring celebrates 95th birthday with favorite team
Child hospitalized after found 'unresponsive' at Splashtown
Show More
Runner dies after collapsing at finish line of Brooklyn Half Marathon
Global K-pop sensation Seventeen kicks it in Houston in new tour
'NFTs: Enter the Metaverse' | Trailer
Authorities search ends for man with felony warrant out for his arrest
Early Voting holds off Epicenter to win Preakness Stakes
More TOP STORIES News