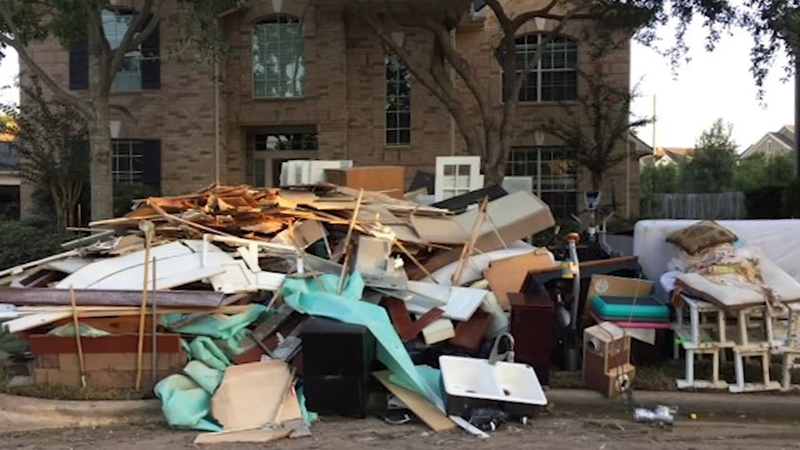 UPDATE: U.S. Congressman Dan Crenshaw, R-Texas, and U.S. Congresswoman Rep. Lizzie Fletcher, D-Texas, are pushing for a $45 million bipartisan effort that would help federal loan recipients denied additional aid. The measure passed the House on Feb. 7, 2020 and is awaiting a vote by the Senate.

HOUSTON, Texas -- Rebecca Loofboro flipped through a large plastic tub filled with file folders, each one neatly organizing every receipt and financial statement for every repair to her League City home within the last two years.

"I lost everything. I lost appliances, cabinets had to be rebuilt, bathrooms remodeled, you know, flooring, walls, everything," Loofboro told 13 Investigates.

Although she received $17,000 from FEMA, it wasn't nearly enough to make all the repairs she needed after Hurricane Harvey flooded her home with two feet of water in August 2017. She didn't have enough savings to make the repairs without help, so she says she took out a $113,000 Small Business Administration loan from the federal government.

When she learned about another federal program aimed at helping victims like her by reimbursing them for any out-of-pocket home repairs due to the natural disaster, she got excited and immediately applied.

Loofboro spent hours pulling documents and filling out an application for the Texas General Land Office's Homeowner Reimbursement Program. She said the state went as far as sending out an inspector who spent two hours taking photos and measurements of every inch of her home and drawing diagrams to put together a report about her flood damage.

"I thought, 'Well this is great. We're in the final stages.' And then I get the email first that said you don't qualify because we basically consider your SBA loan government assistance," Loofboro said.

Instead, she said she'll be paying off the loan for the rest of her life.

"I just wished they hadn't gotten us excited in the first place," Loofboro said. "That's what was hard, is to just keep you going through this whole process and then at the end to say, 'Oops, sorry.'"

Jennifer Jones, of Katy, and Rebecca Loofboro, of League City, talk about the lengthy application process that ended up in denials for both of them.

Loofboro is one of 430 people who the Texas General Land Office say were ineligible for help from the state's Homeowner Reimbursement Program due to "duplication of benefits." About 75 percent of those denied applicants received an SBA loan.

Loofboro and other homeowners with federal loans question why the state allowed their applications to go through the time-consuming process when the GLO knew from the onset that they received an SBA loan and could be denied.

The GLO told 13 Investigates that's because a person who receives an SBA loan can still receive reimbursement from the program, but only if it is deemed "out of pocket expenses." For example, if a homeowner completed $15,000 in repairs and took out a $10,000 SBA loan, they would have to pay that loan back but could receive reimbursement for the remaining $5,000 if they can prove it was an out-of-pocket expense toward repairing their flood-damaged home.

Katy resident Jennifer Jones, who also took out an SBA loan for repairs and was denied by the GLO, said she wishes she knew that information up front.

The GLO has helped hundreds of other residents across the state. So far, the state has approved $18.5 million in reimbursement to 574 homeowners who had out-of-pocket disaster repair expenses. Its program operates based on rules approved by the U.S. Department of Housing and Urban Development. HUD released guidelines in June that updated the "duplication of benefits requirement," meaning Texans who received an SBA loan following Harvey could be eligible for the grant funds after all.

But, in order for the GLO to start implementing these new rules, the state agency says it would have to stop the current program, rewrite the rules and get them approved by HUD - a process the GLO says would take at least six months to complete.

Now, after Jones reached out to lawmakers, they're asking when that's going to happen.

U.S. Rep. Pete Olson, R-Sugar Land, sent a letter to the General Land Office on October 4 asking when denied families would receive help under the new guidelines instead of "an outdated interpretation of duplication of benefits."

In the letter, Olson, joined by seven other members of Congress, asked "What is the GLO's timeline to amend and submit the Action Plan to HUD" and "What other challenges are you facing that make implementing this new guideline difficult?"

A spokesman for the lawmaker told 13 Investigates, "Congressman Olson continues to work on restoring the communities that were hurt by Hurricane Harvey and protect them from future flooding."

The GLO responded to Olson's letter on Thursday.

On a mobile device? Click here to read the GLO's response.

In the meantime, families denied aid are losing hope they'll ever receive funds.

"Any money that I would get from the grant, I would be happy to take that money and apply it to my loan," Loofboro said. "I'm not looking for cash in my pocket. If it could just offset some of my loan, that would be awesome."