Springer's Astros beer ready for tapping: Where you can get it 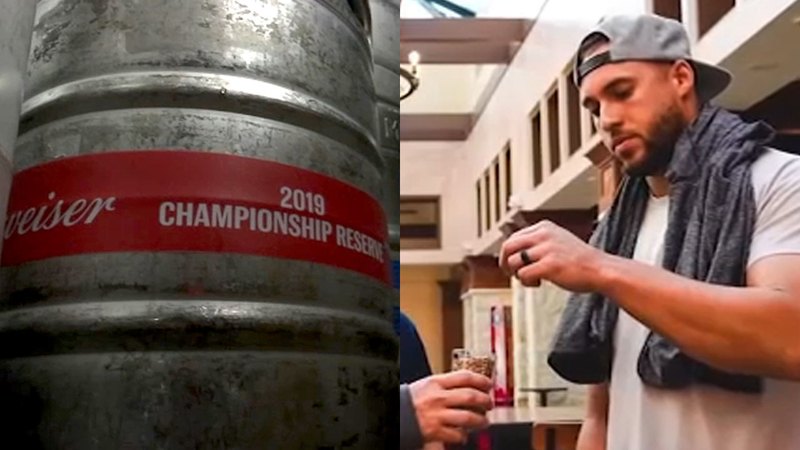 The Astros star crafted the beer, which will only be available at certain locations.

SEE ALSO: George Springer made an Astros beer, but you can't drink it yet
EMBED More News Videos

Beer and baseball are perfect partners. So, is there a perfect baseball beer? How about one that George Springer had a hand in?

"We don't even know what's in it," explained Ashley Morawski, manager of Mo's Irish Pub in Vintage Park. "We don't know what it's going to taste like. No one knows anything other than it's his and we're super excited that we got it."

Despite the excitement, the restaurant can't serve it. The kegs are sealed, and bartenders can't do anything with the handle.

"It's completely locked," Morawski said. "The handle doesn't even move. They locked the outside so you can't even move it to pour it."

The reason why: the beer inside the keg is called 2019 Championship Reserve. In order for people to enjoy the beer, the Astros must take it back.
Springer crafted the beer earlier this month. He visited Budweiser's Houston brewery and worked with the brewmaster.

Anheuser-Busch will be at Mo's Irish Pub, ready to allow fans to enjoy the Championship Reserve if the team wins.

"Someone will be out here waiting for that catch to happen, that last hit, for them to call the game, and we'll make sure it gets tapped that instant," Morawski said.

Budweiser said if you want to get some, monitor its social media pages for other locations. Mo's Irish Pub will sell Springer's beer for $5.

It won't last long. The pub only received a few kegs, which employees believe won't take long to sell.

"We're super excited that we get to have one of the chosen stores," Morawski said. Another reason why the Astros need to win so this beer won't go to waste.