Pres. Trump says he will be at World Series if it goes to Game 5 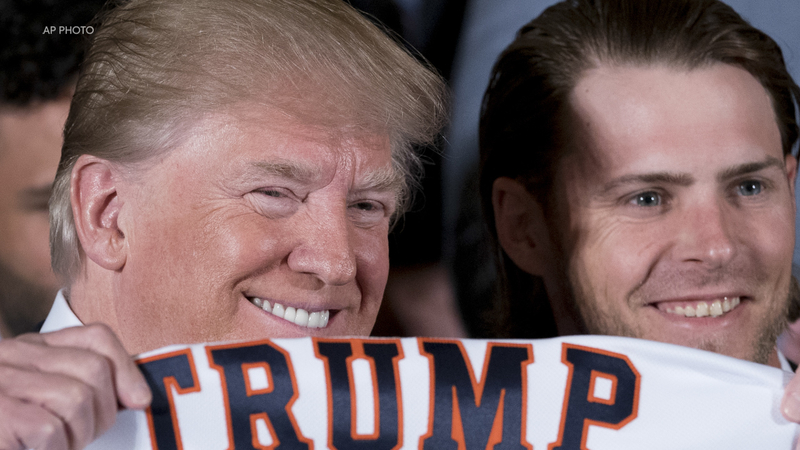 Pres. Trump to attend World Series if it goes to Game 5

WASHINGTON -- President Donald Trump says he is planning to attend the World Series on Sunday if it goes to a fifth game.

The president confirmed his plans Thursday while presenting the Presidential Medal of Freedom to Roger Penske, a businessman and founder of one of the world's most successful motorsports teams.

The Washington Nationals and the Houston Astros are playing, with the fifth game scheduled for Sunday in Washington. The Nationals lead the series 2-0 and could conceivably win it before Sunday's game.

Trump played high school baseball at the New York Military Academy and has thrown out the ceremonial first pitch at major league games. Asked if he would do so again this weekend, he joked that he would have to dress up with a lot of heavy armor and would look too heavy. "I don't like that," he said.

The president is a New York Yankees fan who would often attend their games and sit in the owners' suite or near the dugout. He welcomed the Astros to the White House last year after they won the 2017 World Series and said their victory was even more special following the devastation Hurricane Harvey wrought on the Texas city.

Washington Nationals pitcher Aníbal Sánchez said people should "respect that situation" if the president wants to attend the game.

"He's the president, and if he wants to come, why not?" Sanchez said.

Trump would be the first sitting president to attend a World Series game since George W. Bush threw out the ceremonial first pitch at New York's Yankee Stadium before Game 3 in 2001. As the former controlling owner of the Texas Rangers, Bush knew several of the players involved.