Astros, Texans and Rockets had coach and GM changes in 2020 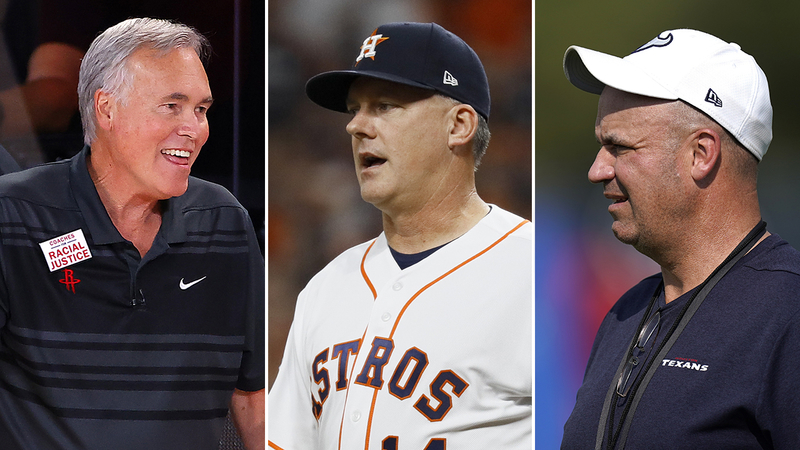 Astros, Rockets and Texans saw coach and GM changes in 2020

HOUSTON, Texas (KTRK) -- The pandemic hasn't been the only thing that shifted Houston sports in 2020, between the NBA bubble, strict NFL guidelines, and a postseason at neutral site stadiums.

In this year, blink and you could have missed a coach or general manager exiting the doors of the Astros, Texans and Rockets.

We certainly tried to keep up, but for those playing at home (because you really shouldn't go out too much these days), here are the changes of leadership that have happened so far with these major sports teams.

If 2020 was supposed to be the season that the 'Stros avenge a heartbreaking World Series loss, then Houston would have to do it without the two men who were integral to the team's string of success.

After MLB revealed at the start of the year that the Astros had stolen opposing teams' signs and devised a system to use those against their rivals back in their 2017 world championship season, owner Jim Crane gave the axe to general manager Jeff Luhnow and manager AJ Hinch. Both had been suspended by MLB for one season.

With no time to wallow in shame, the Astros quickly hired Dusty Baker as skipper and rising MLB executive James Click as GM.

While the team still would not be able to live down the scandal, Baker and Click are finding some success, all thanks to the talented roster that remained. The Astros clinched their fourth consecutive ALCS berth.

It appears a long-time MLB manager with World Series experience is finalizing a contract to lead Houston after the sign-stealing scandal.

The Texans delivered a two-for-one special when they fired head coach and general manager Bill O'Brien, who went winless through the first four games of the 2020 season.

O'Brien, who had been head coach since 2014, recently snatched the GM role last year. But it was the handling of that position that may have done in "B.O.B."

The Hopkins trade stuck out the most on the minds of fans and pundits.

Could Romeo Crennel be who the Texans need to turn the franchise around? Take a look at the background of the Super Bowl champion coach.

It seems like every year, fans could count on stability in the leadership roles at the Houston Rockets.

The offseason right after their elimination from the NBA restart bubble was marked with the prompt exit of head coach Mike D'Antoni, an offensive guru who came to Houston in 2016. He decided not to extend his contract before the 2019-2020 season, and he let his contract expire when the Rockets' bubble burst.

Following him out of Toyota Center was Daryl Morey, a constant presence for the team as general manager.

Morey's departure after 13 years in Houston might be puzzling. But his exit, which was reportedly mutual with the Rockets, was made after repeatedly falling short of an NBA championship.

Still, he kept the Rockets in the conversation as a Western Conference heavyweight, thanks almost entirely to keeping James Harden happy.

Houston sports has another shake-up in 2020, this time in the Rockets' front office. So what's next for Clutch City? The video breaks it down.

So what's next for the Rockets? Hit play to get an idea.