Josh Reddick to Alex Bregman: 'I haven't seen you at the park once this offseason' 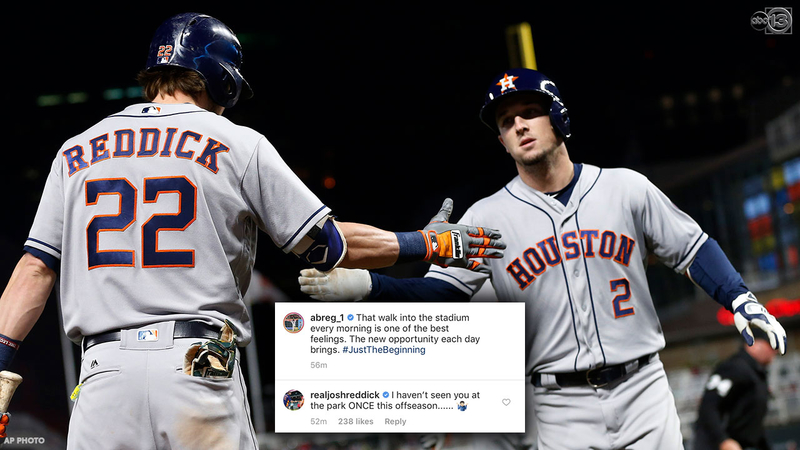 HOUSTON, Texas (KTRK) -- It might not be anything, but this was some back-and-forth between two popular Houston Astros teammates.

On Friday, Alex Bregman posted a photo of himself mid-strut on Instagram with the caption, "That walk into the stadium every morning is one of the best feelings. The new opportunity each day brings. #JustTheBeginning"

Just four minutes after the post made it to the social media platform, Josh Reddick commented, "I haven't seen you at the park ONCE this offseason."

For Bregman's part, the all-star clarified that he was talking about during the season.

Bregman has been open about his offseason activities via his YouTube channel, which, as of Friday, has nearly 38,000 subscribers since it began after Houston's postseason elimination.

In it, Bregman posts about his general shenanigans, including pranking youth baseball players and going on road trips. To his credit, though, there are at least two videos showing him in the weight room.

Earlier this week, Reddick told ABC13 about balancing wedding plans with his fiancee with his workouts to prepare for 2019.

Is this just temporary? For Astros fans, the hope is it indeed is.

The Astros slugger continues his exciting offseason by umpiring a youth baseball game.

Haylee and Steven Lopez were stunningly surprised when Alex Bregman walked into their wedding.

Houston Astros outfielder Josh Reddick is over the moon after his off-day proposal at Johnson Space Center.