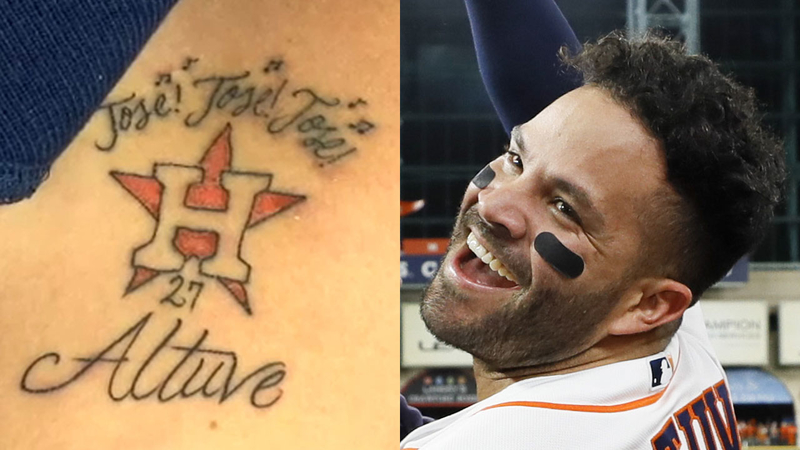 HOUSTON, Texas (KTRK) -- For someone who's only 5'6", Jose Altuve has truly made an enormous impact on Houston and the Astros fans who admire his heroic exploits.

And it's that impression that will literally last a lifetime for superfan Frances Flores.

Like many anxious fans watching the waning moments of Game 6 of the AL Championship Series, Flores watched the game with friends at a house party. She recalled the bottom of the ninth inning, when both Houston and the New York Yankees were tied.

When the superstar second baseman came up to the plate, Flores told the friends who were watching with her that if Altuve hit a home run, she would get his name tattooed.

She continued, "He made the home run, and I was like 'oh my god!' And everybody was like, 'You're getting a tattoo!'"

Altuve launched a blast to left-centerfield, sending the team and fans into a World Series-sized euphoria.

Just like any honest Astros fan, Flores made good on that vow, inking the words "José! José! José!" above the Astros star "H" logo. Below the logo is the slugger's number "27" and "Altuve."

"He's done so good for the team that he deserves it. I don't mind having his name on me," she said.

SEE ALSO:
Jose Altuve is so huggable to everyone!