13-year-old gets presidential praise for leading projects for pets 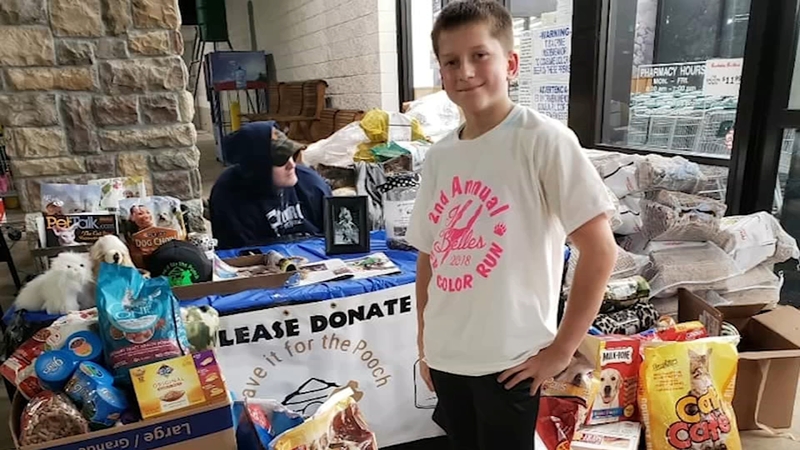 Boy gets presidential praise for leading projects for pets

CONROE, Texas (KTRK) -- A 13-year-old with a huge heart for animals is getting attention from around the world and even from President Trump.

When he was just 10 years old, Jayson founded "Leave it for the Pooch," a program that collects new and gently-used supplies and food for cats and dogs. He makes donation drop-offs once or twice a week at shelters and dog rescues like A Chance to Bloom in Conroe, where ABC13 caught up with him.

"I make donations here as much as I can," said Jayson. "We collect anything that can help benefit an animal's life while it's in the shelter, like blankets, leashes, dog food, cat food, all of that. We try to help shelters from all over the place as much as we can."

He also started a fund called "Pennies Four Paws" after he began receiving monetary donations. Pennies Four Paws pays for the medical care of sick and injured strays. So far, he's collected around $3,000 for the cause.

"I know some no-kill shelters don't get government help, so I can be that help that they need to keep going," said Jayson.

Additionally, Jayson began a Facebook campaign to benefit AniMeals on Wheels, which helps feed the pets of underserved seniors. He was able to raise $1,200 to buy 1,000 pounds of pet food for the program.

His latest project to raise awareness is a T-shirt campaign. After A Chance to Bloom gave him a T-shirt with its logo, he decided to begin collecting tees from various animal shelters and wear a different one every day this school year.

"We've got 240 rescue and foster programs sending us shirts," said Jayson. "And we get them from all over the world. We've gotten one from Japan, we're getting one from Zimbabwe, we got one from the UK."

He hopes the T-shirt project will raise awareness about how many animal shelters are in need of help, and encourage others to spay and neuter their pets. He also plans to create T-shirt quilts to raise money.

"We asked every shelter or foster organization to send two shirts," said Jayson. "One of the shirts I will be wearing for my school year, and the other one will be made into a quilt that we will auction off to hopefully raise a ton of money for the shelters."

Jayson is receiving so many shirts, he says he may end up wearing them into his high school years.

"I didn't know that so many people shared about us," he said. "But once we started the T-shirt project, I actually realized how many people followed us. It's incredible what it does, really. You never expect this kind of outcome and then you've got the whole world helping you out."

To donate a T-shirt or pet supplies to Jayson, visit his Facebook page Leave it for the Pooch.