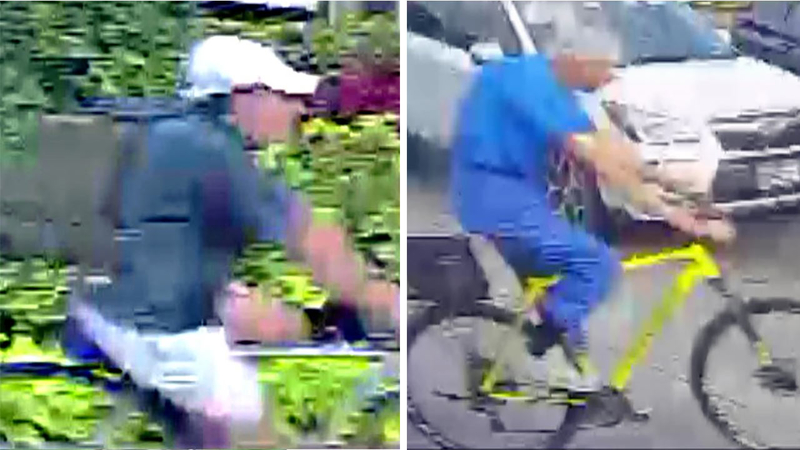 Throughout Monday, authorities began showing surveillance images of Dr. Mark Hausknecht and the suspect in his murder. Hausknecht, who was also on a bicycle at the time, was shot on his way to work last Friday morning.

The doctor can be seen heading north at 6700 Main and crossing into the West Holcombe Boulevard intersection.

Other photos show the suspect behind the doctor. The shooting happened moments later, one block away.

Later Monday afternoon, new photos taken from a dashcam camera were released showing a clearer look of the suspect.

Police said the suspect was wearing a blue short-sleeved polo shirt, a khaki ball cap, and khaki shorts. The backpack he was carrying was a large, fully loaded, olive green backpack.

UPDATE #4 New surveillance photo of the suspect wanted in the killing of Dr. Hausknecht. Suspect is now described as wearing a blue, short sleeved polo shirt, (not a gray warm-up suit), a khaki ball cap and khaki shorts. He has a large, fully-loaded, olive green backpack. pic.twitter.com/VRk66CFeXb

So far, no arrests have been made, and police are searching for leads into Hausknecht's death.

On Sunday, friends of Hausknecht remembered the prominent doctor.

"He just played a very great role in the community," a woman said.

Hausknecht's wife, Dr. Georgia R. Hsieh, called his death "senseless."
"So many have asked what can be done to help. While law enforcement has given you their focus on finding the criminal, I am asking you to use your vote and your voice to stem the tide of this growing public health epidemic," she said in the statement.

Sketch released of suspect wanted in death of prominent doctor in Houston.

UPDATE#3: Road traveled: These still photos show Dr. Hausknecht (in green) & the suspect (in red). The Dr. is headed north at 6700 Main & crossing into the W Holcombe Blvd intersect. 2nd & 3rd photos are suspect behind the Dr. The shooting happened moments later, one block away. pic.twitter.com/d56PDIu4Ah