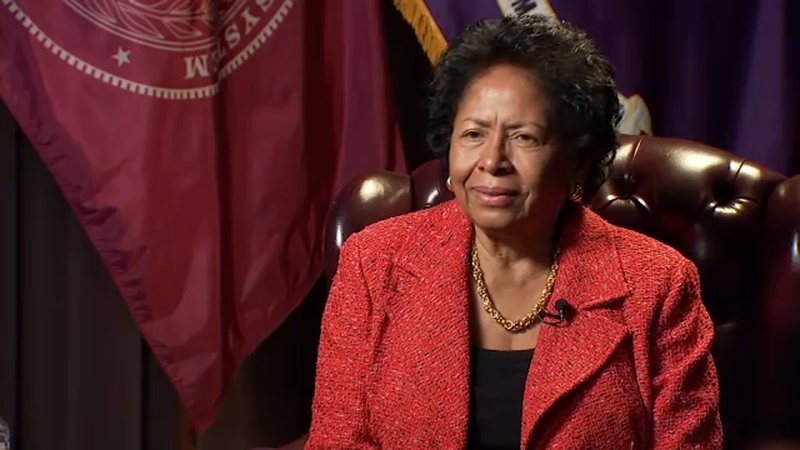 It's an amazing journey - from growing up in Houston's Fifth Ward to making history in the hallowed halls of the Ivy League.

Dr. Ruth Simmons has shattered a lot of ceilings on her way to becoming the first Black woman to serve as president of an Ivy League university.

Now she's working to bring that kind of status and opportunity to an historically Black college near Houston - Prairie View A&M University. And some powerful people are betting she can do it.

"I never had a toy as a child," Simmons said.

She was the youngest of 12 children born to sharecroppers in Grapeland, two hours north of Houston. She describes her daily lunch as "a biscuit in a bucket with syrup poured over it." For Christmas, each child got a shoe box with some nuts and fruit.

Her life changed when she was old enough to go to school.

"I remember the day I walked into the classroom, and my first impression was 'my goodness', there was a lot of light, and it was orderly, and there was a place for me," Simmons said. "For the first time in my life, you know, in a crowded household, there was actually a desk for me."

That love for education stayed with her when her family moved to Houston's Fifth Ward.

When she was 15, her mother died. That's when her teachers at Wheatley High School stepped in.

"I was truly sort of wracked by grief, and I was for about 10 years thereafter," Simmons remembered. "But that was a moment when my drama teacher came into my life."

She said learning to work on theater productions, by building sets and making costumes, helped get her through that grief. She was an excellent student, and her teachers pushed her to leave Texas and to go to an historically Black college in New Orleans, Dillard. They helped by giving her money and even clothes.

"They took me to their houses, and went into their closets, and found clothes for me to pack, to go off to college," She said.

While studying at Dillard, she was sent to spend a year at Wellesley, an elite women's college in Massachusetts. She says it often felt alien coming from a family where her dad and brothers ruled the house.

"And here I am in this environment with women who believe they can do anything," Simmons recalled. "It was bizarre."

It was also instructive. She remembers a French professor there, and how she struggled in his class.

"He refused to allow me to drop the course. And when I said, 'Well, what am I to do?' And so he said, I thought, very unsympathetically 'work hard, go to the language lab'. And that was it," she said.

"I thought that was the most inhumane thing that I'd encountered, but what did I do? I went to the language lab. I worked hard, and I mastered French," Simmons said. "I've also often said to my students, that was a pivotal experience for me. Because from that moment when that occurred, I was never again afraid academically."

Then she moved to Princeton University in 1983. As associate dean of faculty, she made it a point to recruit more Black professors, including writer Toni Morrison, who went on to become the first Black woman to win a Nobel prize in literature.

"Princeton gave me an enormous amount of self-confidence about my ideas, and about what I could achieve," Simmons said.

After a brief stint at another HBCU, Spelman College, Simmons returned to Princeton as its Vice Provost.

"I wanted to bring scholars to Princeton to demonstrate that African Americans were every bit as smart as the smartest of, well, maybe not all like Einstein, but definitely in the same league," she said.

Another elite women's college, Smith College in Massachusetts, hired her as their president, the first Black woman ever to hold that post.

She spent 6 years there before making history again, even establishing the first engineering department at an American women's college. That's when Brown, an Ivy League university, offered her a post as their president.

She says she was apprehensive.

"I've always been very leery about the efforts to pretend to have inclusion and diversity," she remembered. "I didn't want to be a figurehead, appointed to do something because people wanted to feel good about it."

Simmons said she expressed her suspicion to university officials at the time.

"You're picking somebody who was born in that shack, who grew up next to the railroad tracks, and who went to a Black college, and you're saying that's the best person to be president of an ivy league college? Are you sure you want to say that?"

After 10 years and raising nearly $1 billion for the university, she retired to Texas. Then in 2017, Prairie View came calling, asking her to serve first as their interim president, then to take on the position full-time. She says she wants to give students at this HBCU as much opportunity as the Ivy Leagues would.

"Oh no, I have misunderstood what they said. They probably said $15 million and I'm thinking it's 50," She remembered. "So, I composed myself and I said, 'What'd you just repeat what you said?' And then she said five - zero - $50 million."

The gift was just the latest high point in Simmons' long career.

"I was thunderstruck. It was a surprise beyond any, probably, that I've ever had in my professional life," she said.

And in a case of perfect symmetry that no novel or screenplay could devise, Scott was taught at Princeton by the very professor Simmons hired.

"Her teacher was Toni Morrison at Princeton." She continued. "I like to think that Mackenzie Scott is who she is because she had the advantage of having the kind of education I was describing. And when you have the mighty Toni Morrison as your mentor and your professor, something has to change in your life and it did for her. And so I'm ever grateful to her."

While Simmons is thrilled to have more money for programs and scholarships, she says she's even more driven to bring PV and its students the kinds of opportunities they could get in a top tier university.

And she's never forgotten how much going to college changed her own life.

As she looks back on growing up as the child of sharecroppers, "I spent part of my life being ashamed that I was born in that shack, ashamed of those fields, ashamed of being in a desperately poor circumstances, ashamed of being the product of segregated society. So it took me a long time to understand that that's actually where my strength lay actually It was not until I became president of Smith when the New York times published a story on my appointment, and they disclosed all of who I really was and where I'd come from, and then suddenly, I started to hear from all of these kids around the country who said that they now understood what they could do."

Opening up about her own past helped Simmons learn its positive impact on those around her.

"I think we often don't understand what sharing who we are fully can do for others, and particularly for young people," she said. "And I learned that late."

But Simmons is definitely making up for lost time.

In honor of Black History Month and ahead of Women's History Month, ABC13's Melanie Lawson visits with Dr. Ruth Simmons.