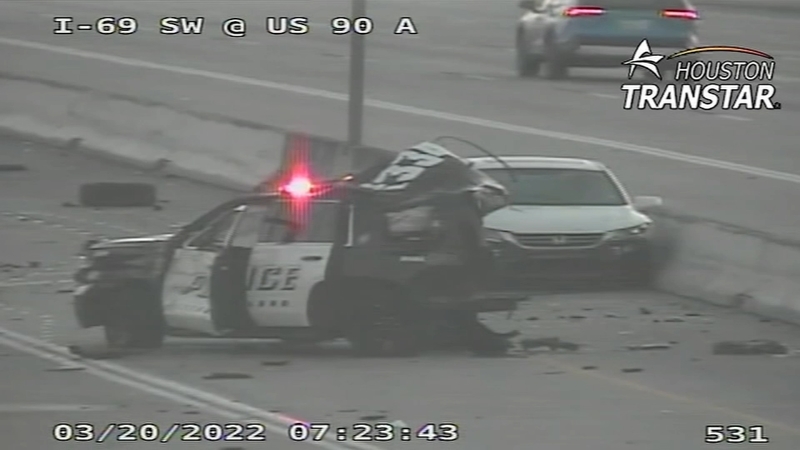 SUGAR LAND, Texas (KTRK) -- The Sugar Land Police Department credits two officers' heroic actions with saving the life of one of their brothers in blue.

Officer Ruben Munoz was still in the hospital Saturday night, a week after being critically injured in a multi-vehicle crash involving an alleged drunk driver on Sunday morning.

At about 2 a.m. Munoz responded to call for a disabled vehicle and used his patrol car to block the scene on U.S. 59 South.

The driver involved in that crash hit some debris, lost control of his car and hit one of the inside walls, according to police.

Munoz had stepped out of his vehicle to conduct a sobriety test. Once back inside his patrol car, which was parked in the emergency lane, authorities said a pickup truck crashed into it.

The driver admitted to drinking and was taken to a nearby location for sobriety testing, according to police.

"I would say 10 to 15 minutes after (the call) is when the wrecker driver called saying that an officer got hit by another car on the highway," Officer Daniel Barbarick said.

Barbarick and Officer Demarcus Mitchell responded to the scene, where Munoz was critically injured.

"It was probably one of the worst accidents I've seen," Barbarick said. "His car didn't look like a car anymore, it was just parts everywhere."

Barbarick said with the help of witnesses, he was able to get Munoz out of his patrol vehicle. Moments later, another car hit Munoz's Tahoe.

"Once I got him out of the car, within seconds is when the second car was hitting," Officer Barbarick said.

Both officers were focused on getting their injured brother in blue to a safe spot to before performing CPR.

The police department credits the two officers' quick action and training with saving Munoz's life. He was flown to a hospital and his condition is improving, according to police.

The first driver that struck Munoz's patrol vehicle was 25-year-old Julian Requena, police said. He has been charged with two counts of intoxication assault. Additional charges are pending.

Police believe alcohol could be a factor for all three civilian drivers involved. The investigation is still ongoing.

Anyone wishing to send cards, flowers or well wishes, please direct them to the police department administration by reaching out to Linda Myers at lmyers@sugarlandtx.gov or police@sugarlandtx.gov.

All monetary donations and coordination of meals will be handled by the Sugar Land Police Officer's Association (SLPOA). To work with SLPOA, please reach out to sugarlandpoa@gmail.com.

The Sugar Land Citizens Police Academy Alumni Association (CPAAA) will also be organizing ways to support officers in the department. If you would like to contribute your time or money to CPAAA, please send an email to Lt. John Volek at jvolek@sugarlandtx.gov.

A GoFundMe as been created to help with Munoz's recovery costs.