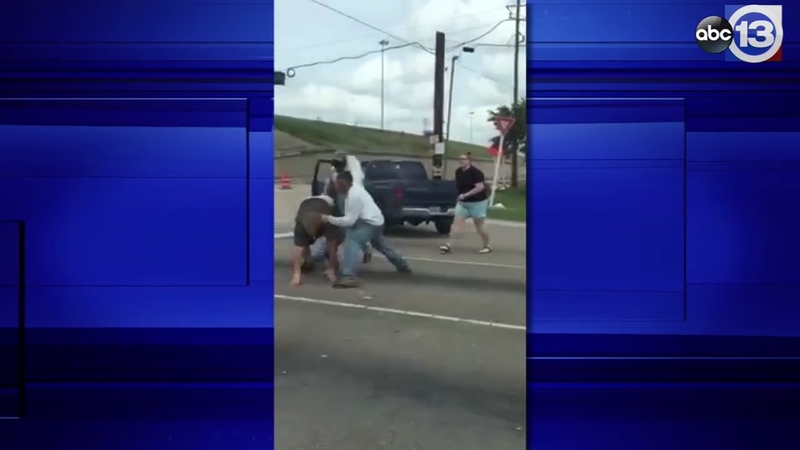 HOUSTON (KTRK) -- UPDATE: The Harris County Sheriff's department says it is getting closer to wrapping up the investigation. All four people involved in the altercation have been interviewed. Once the investigation is complete, the case will be turned over to a grand jury to determine what, if any charges will be filed in the case.

A brawl erupted Saturday morning on FM 1960 in an apparent road rage incident. Eyewitness David Dao said his daughter was recording with her cell phone video when they rolled up to the intersection at U.S. 290 and saw four people arguing.

"When the white car proceeded forward, just a few inches, that aggravated the truck driver because he thought, 'Oh no you're not! You're not going in front of me,'" Dao explained. The truck then drove up several feet, nearly hitting the woman. She was a passenger in the truck, but had remained outside the vehicle.

Many of you asked that we post the full video on our Facebook page of this road rage incident in SW Houston yesterday to provide a better perspective of what transpired. Below is the full video. (Warning: Some people may find the content or language disturbing)

"I couldn't believe it. As soon as he kicked the grille, I was like, 'This is going down now,'" Dao said. "I was thinking this is going to be bad. At that time, I knew because there's physical damage now."

"It's not worth it. At the end of the day, how much further are you going to get?"

He says while the four people were fighting, they were so close to his car, that he remained stopped to block traffic to keep other drivers from hitting them. He also couldn't get out to break up the fight because his daughter was in the car. He says he told his daughter to start recording because they could be witnesses to something where people might need some help.

The Harris County Sheriff's Office has no record of an accident reported, so it's not known what happened to the drivers once they took off.