Road rage against cyclist in Deer Park caught on camera 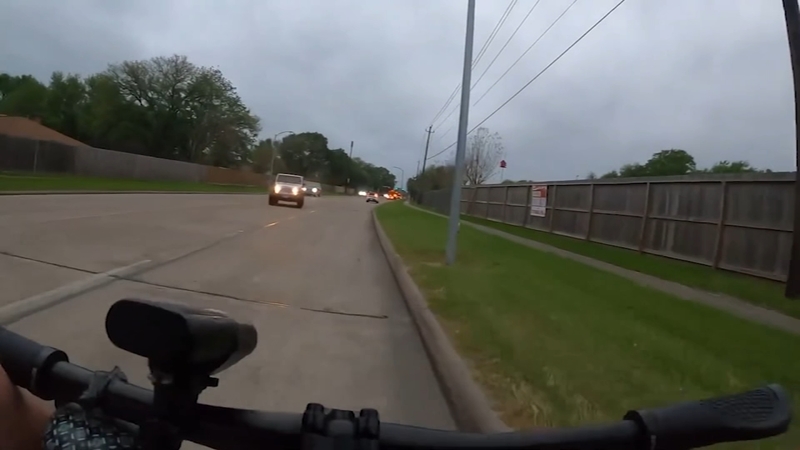 DEER PARK, Texas (KTRK) -- A road rage incident was caught on camera by a targeted cyclist in Deer Park on Wednesday.

The Vehicular Crimes Division of the Harris County District Attorney's Office is now reviewing the case, which could mean criminal consequences for the driver.

"I was like, 'Whoa!' There was a moment there where I thought he was going to hit me," said the cyclist, who asked ABC13 not to reveal his identity.

The cyclist says he was riding down Georgia Avenue near Battleground Golf Course at about 7 a.m. when a white Jeep Wrangler sped up beside him.

The driver inside began yelling and using profanity, according to the cyclist. He reacted by pointing his middle finger at the Jeep driver.

"I wish I wouldn't have reacted like that, but it's how I reacted," said the cyclist.

The cyclist says he has no idea what provoked that driver, but two cameras the cyclist had recording his route caught the Jeep speed off and, within a minute, U-turn and speed back towards the cyclist, driving into the oncoming lanes to side-swipe the cyclist head-on.

"He was initially upset that the bicyclist was on the road, and that's kind of what set him off. Something prior to that had probably already ignited, and this was just the tipping point," said Brown.

"He definitely made some bad decisions, and we're just going to have to review those to see if it rises to criminal conduct," said Brown.

The Deer Park rider says cycling is his only mode of transportation, and he takes many safety precautions, like cameras attached to himself and his bicycle. He also carries mace.

So far, he has declined to press charges but says he worries this driver is not taking responsibility for his dangerous behavior.

"I feel like I'm kind of doing the wrong thing because what if this happens again? I'm going to have to live with a huge burden of knowing I didn't do anything, and maybe I could have stopped it," he said.

It's a burden the District Attorney's Office is now taking on.