Gov. Abbott ahead of opponent O'Rourke by 5%, according to University of Houston survey 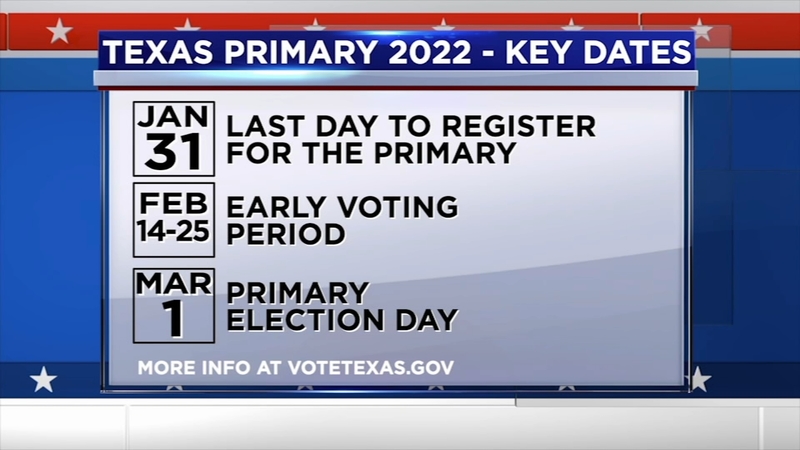 HOUSTON, Texas (KTRK) -- Jan. 31 was the last day to register to vote in order to participate in March's primary election.

The Hobby School of Public Affairs at the University of Houston has released an online survey of Texas voters, with 1,400 people responding.

"Republicans continue to be the dominant group in Texas and the real election is taking place in the Republican primary statewide," said Mark Jones, a senior research associate at the Hobby School.

The survey shows Gov. Greg Abbott, Lt. Gov. Dan Patrick, and Attorney General Ken Paxton all winning their primary elections, and then going on to beat their Democratic opponents.

"A majority of Democratic primary voters don't know anything about any of the candidates running other than Beto O'Rourke," Jones explained. "Beto is the cat's meow for Texas Democrats. They love him. He's probably going to win close to 90% in their primary. But the other democratic races, over half of the primary voters are undecided because they simply don't know enough about the candidates."

According to the survey, Gov. Abbott is expected to beat challenger O'Rourke with 48% of the vote.

"Joe Biden, Kamala Harris, and national Democrats are very unpopular in Texas, and so we will see probably Beto's showing begin to drop a little as Abbott spends millions on the airwaves to tie him to these unpopular national democrats," he said. "One thing that could change the dynamics of this race is a power outage similar or even somewhat less than what we had in February 2021. If that happens, the people that the survey says is going to blame is Greg Abbott."