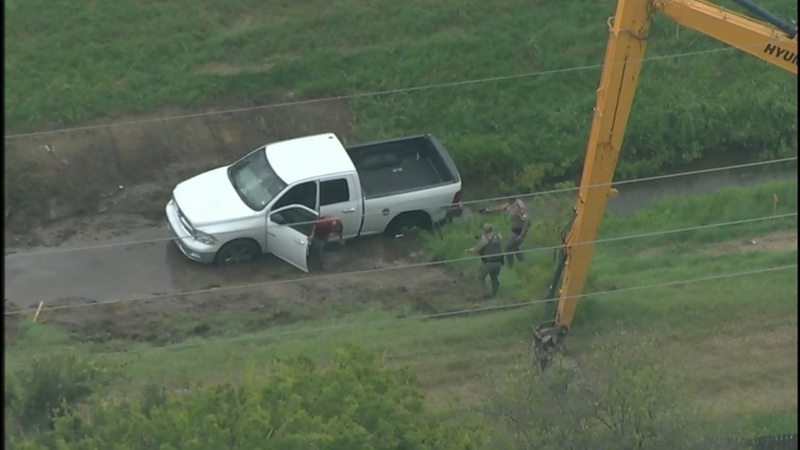 HOUSTON, Texas (KTRK) -- A drug suspect led police on a high speed chase across Houston that went on for more than an hour.

The suspect was arrested after his pick-up truck got stuck in the mud near a drainage ditch near W. Harrow Dr.

Watch video to see police try to stop a suspect fleeing in a pickup truck.

Police say the chase started after the suspect made a drug deal with undercover narcotics officers before 5 p.m.

The suspect has priors for aggravated kidnapping and aggravated sex assault.

The suspect, in a white pickup, led police officers through Montrose, before making his way to northwest Houston.

SkyEye 13 clocked the pickup at more than 90 mph.

At one point, it appeared the driver was cornered in a cul-de-sac, but then drove over the sidewalk to elude police. Officers tried to perform a PIT maneuver. The driver took off over the grass of an empty lot to escape.

There were a number of close calls in afternoon traffic as the driver occasionally drove the wrong way on streets. The driver took an aggressive stance, using the vehicle as a weapon.

As the pursuit neared the 45-minute mark, it looked as if the pickup was suffering from some damage, possibly incurred when driving over a sidewalk or median.

Just after 6 p.m., the driver finally could go no further, hitting the banks of an apparent drainage ditch along West Harrow Drive. Officers took the man into custody.