Boy stung by sting ray on beach in Galveston 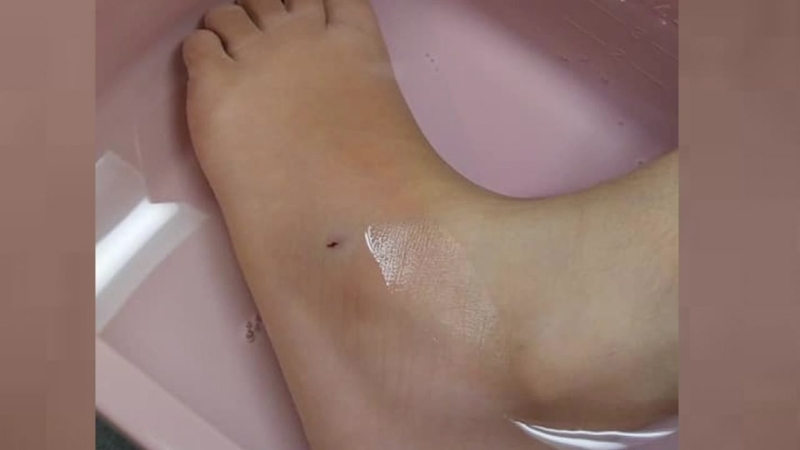 GALVESTON, Texas (KTRK) -- Tyrese Harris was playing in the water along the Galveston Seawall near 57th Street Wednesday when the pain set in.

"It felt like metal went through my foot. Then the metal stopped and glass went on in. It hurt," Tyrese said.

When Eyewitness News reporter Christine Dobbyn asked Tyrese if it was the worst pain he had ever felt, he replied, "Yes!"

His aunt, Stephanie Johnson, was nearby.

"I run over and he lifts his foot up, and we just see blood coming everywhere," Johnson said.

The beach patrol arrived and told them a stingray caused the bleeding.

"I was only concerned about jellyfish or sharks. I've never heard of a stingray in Galveston, so now we know. That's why we want to tell others, to warn people," Johnson said.

Peter Davis, chief of the Galveston Island Beach Patrol, says they see maybe two stings a week. On Friday, they treated a man who was stung at the beach near 61st Street.

"We usually call EMS before we treat them on the beach and advise them to go to a clinic for further medical attention. The treatment is heat," said Davis.

He says a clinic can check if the barb is still inside, and heat helps remove the pain. He suggests placing your foot in hot water to reduce pain.

At the Aquarium at Moody Gardens on Galveston Island, Cownose, Yellowspot and Atlantic Rays can be seen in the tank.

The assistant curator of fishes, Roy Drinnen, says the barbs are removed at the aquarium for safety. But he added, "I've seen people get barbed in less than six inches of water."

He says it's not uncommon to see reports of beach-goers getting stung in Galveston by rays but stings are rarely deadly.

"It's a defensive mechanism. Generally, rays are not aggressive. What happens is a person will be stepping through the water and accidentally step on one, and as a protective response, they'll flip that tail over with the barb in it and that's how people get barbed," Drinnen said.

He showed a trick to scare off sting rays, by shuffling his feet along instead of actually stepping.

"If you drag your feet and there's a ray they'll swim away," Drinnen says.

Tyrese was checked out at the ER and an x-ray was taken. The barb was not in his foot. He's feeling much better and has quite a summer vacation story to tell as he goes back to school.

"I'm gonna tell them I got stung by a stingray and it hurt a lot," he said.

His aunt added, "He was strong and I'm proud of him. I know he'll get back in the water one day. Fear isn't going to stop you."

He also has a bit of advice for anyone headed to the beach: "Always do the stingray shuffle."