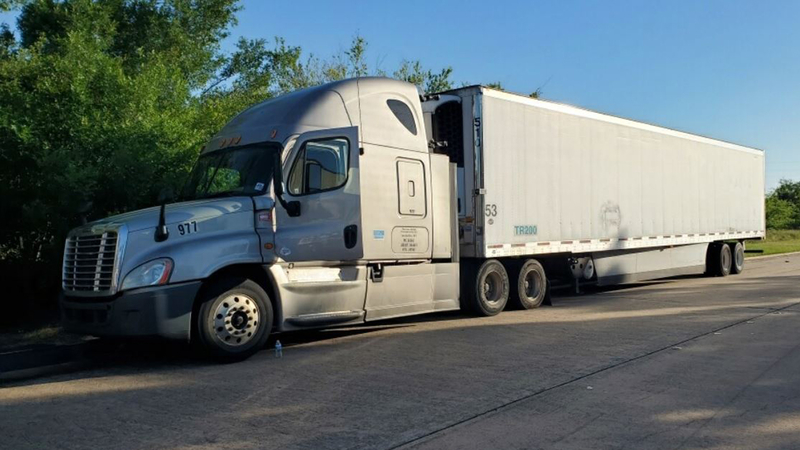 KATY, Texas (KTRK) -- Five undocumented people were discovered inside a tractor-trailer in Katy in what authorities believe is a suspected human smuggling attempt.

Homeland Security Investigations Houston and the Harris County Constable's Office Precinct 5 responded to a scene at 1400 Vander Wilt Lane Wednesday morning based on reports of suspicious activity. That's where they found the five people, who appeared to be part of the human smuggling attempt. Deputies gave them food and water before turning the case over to HSI Houston.

"I don't have any words for it," said James Powell, who works next door to where the truck was parked. "I'm just shocked, and I feel bad, and (it) does hurt me to hear that it's going on."

Powell said the person who called the police, who also works nearby, saw a lot more than five people near the truck Wednesday morning.

"A lot of people standing out," Powell explained. "They were using the bathroom in the woods. Normally, we see a lot of truck drivers, but not a lot of people here at that time."

Pct. 5 deputies, responding to a suspicious activity call this morning, found 5 migrants inside a tractor-trailer in Katy. The undocumented individuals appear to be part of a human smuggling attempt. Deputies gave them food and water before turning their case over to HSI Houston. pic.twitter.com/rRSeeOCVoZ

According to the view from Google Earth, the address appears to be near multiple businesses. Authorities said they can't comment further while the investigation is ongoing.

Just last week, nearly 100 undocumented people were found huddled inside a home in southwest Houston after a reported kidnapping led police there. HPD was called to the 12200 block of Chessington Drive, where they found 97 undocumented people being held in two rooms of a home.

In that case, five people, all non-citizens of the U.S., are accused of "harboring, concealing and shielding illegal aliens for the purpose of commercial advantage or private financial gain."

Elaine Andino, director of United Against Human Trafficking in Houston, said the growing border crisis could mean more of these cases.

"We're anticipating a high level of human trafficking cases due to so many people coming over to the border right now," Andino explained.

There are signs to look for to spot potential smuggling situations. Andino said be attentive in your neighborhood, and look for anything out of place, and in truck areas watch for patterns.

"Often times, traffickers and smugglers use similar locations or the same spots," Andino explained. "If you continuously notice, there's a congregation of a large number of undocumented people in this area all the time. The faces keep changing."

Smuggling Andino said often leads to human trafficking. If you suspect smuggling taking place, you can call the police or the hotline at 1-888-373-7888.

Federal charges into the human smuggling case revealed how nearly 100 undocumented people were kept inside the southwest Houston home.