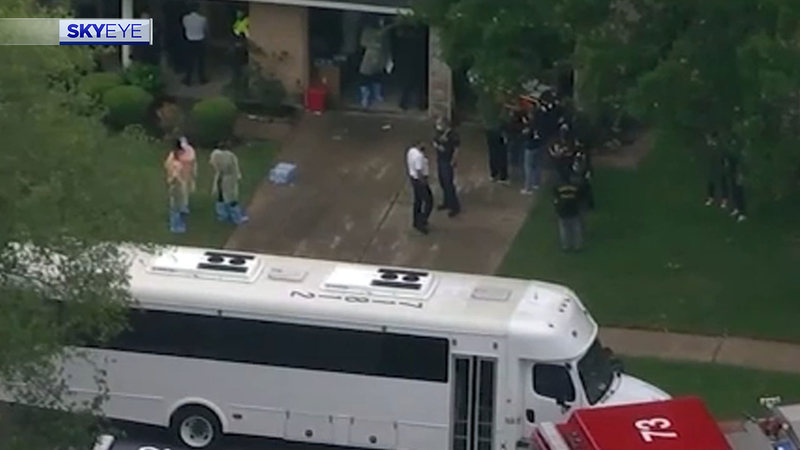 HOUSTON, Texas (KTRK) -- Federal charges filed over the weekend have shed light into the reported kidnapping that led police to find nearly 100 undocumented people huddled inside a home in southwest Houston.

According to the office of acting U.S. Attorney Jennifer Lowery, five people, all non-citizens of the U.S., are accused of "harboring, concealing and shielding illegal aliens for the purpose of commercial advantage or private financial gain."

A criminal complaint was filed on Saturday after Houston police were called to the 12200 block of Chessington Drive, where they found 97 undocumented citizens being held in two rooms of a home.

The complaint identifies the following people being alleged in the case:


All five are slated to appear before a federal judge in Houston on Monday afternoon.

Police were originally called to a kidnapping just off the South Beltway. Now, a possible human smuggling case is under investigation.

When police first gave word of the possible human smuggling operation, they said a report of a kidnapping prompted a warrant to be served in the neighborhood just off the South Beltway.

HPD Commanders and PIO at 12200 Chessington Drive after dozens of persons found inside a residence. Incident initially reported as a kidnapping and may possibly involve human smuggling. Media briefing expected in about an hour. #HouNews pic.twitter.com/uNyKoYy00n

The federal charging document states law enforcement was told by a woman that her brother had been kidnapped after she paid several thousand dollars for him to be smuggled into the country. However, the smugglers had allegedly demanded additional money before they would release her brother. They also threatened to kill him, according to the charges.
The investigation led to the home, where, as the charges allege, the rooms had deadbolts on the doors facing the outside which prevented escape. All of the males were in their undergarments, the documents add.

There were no children among the dozens of people crowded in the home, with the youngest being in their early 20s. Only five women were among those found. The rest were identified as males.

The charges also allege at least one was told if the money was not paid, he would be put in "4 pieces of wood."
Some of the victims allegedly identified the five suspects as those conducting the smuggling operation.

Each suspect faces up to 10 years in federal prison and a possible fine of up to $250,000 if convicted.