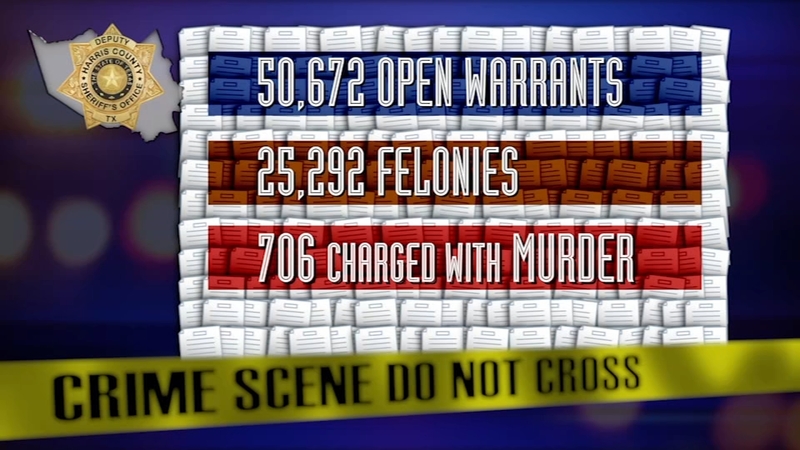 With 'limited manpower' thousands of wanted felons are on the streets

HOUSTON, Texas (KTRK) -- Currently, there are 50,672 open arrest warrants, according to records obtained from the Harris County Sheriff's Office. About 25,292 of those are charged with felonies or the most serious of crimes. More than 700 people charged with murder have open arrest warrants and remain either on the streets or outside the criminal justice system here.

Lt. Kacey Haberland, who works in the criminal warrants division, admits his team is overwhelmed.

"It's a high number. It's not good to have anyone on a violent crime running around, but there's only so many investigators and officers who can run these warrants," Haberland said.

According to Haberland, this does not mean more than 700 murder suspects are wandering our streets. He said some suspects are in custody in other locations waiting to be extradited to Harris County. However, he doesn't know how many. Still, he predicts there are hundreds.

Beloved and long-time Cracker Barrel employee, 59-year-old Robin Baucom, was shot and killed in January while protecting another employee at work during an attempted robbery.

Her accused killer, Nathan Humphrey, was later killed by deputies who were trying to arrest him. Humphrey had five warrants out for his arrest at the time of the murder - three were for felonies. According to court records, Humphrey had a violent criminal past. He was charged with aggravated assault of a family member and burglary of a habitation for allegedly breaking into his girlfriend's home and assaulting her more than four months before the Cracker Barrel shooting.

It was not until he was accused of murder that he became a priority to track down. Baucom's sister, Gail, is left wondering whether her sister would still be alive if officers tried to arrest Humphrey sooner.

"You wonder why. What can be done?" Gail asked. "Does anyone care that can make the changes? Do you not care what happens to innocent people?"

ABC13 uncovered fewer than 10% of people with warrants were being arrested every month in 2021. While arrests are happening, there are roughly 4,000 to 6,000 new warrants every month.

"We are in the negative. We are in the red every time on the warrant count, more coming in than we are able to arrest," Haberland said.

The majority of the arrests come from traffic stops. However, ABC13 wanted to know how many deputies are going out and arresting people on warrants each day.

Records show only 17 investigators and sergeants within the Harris County Sheriff's Office criminal warrant division are working to find wanted offenders. This means, only over a dozen people are responsible for looking for more than 25,000 suspects wanted for felonies right now.

Other agencies like Houston Police Department can also run warrants. With limited manpower, Haberland said they focus on the most violent criminals.

"We have so many murders in Harris County, unincorporated, or the city of Houston, that they focus predominately on murders," Haberland said.

About a dozen investigators are responsible for looking for more than 25,000 people wanted for felonies.

Because that takes a priority, it means those wanted for other crimes, like in Humphrey's case, a convicted felon, wanted for assaulting and breaking into his girlfriend's apartment, are put on the back burner.

"It should be a priority, I will be the first to say it, but there are not enough people," Haberland said.

Haberland said the spike in crime, not enough officers running warrants, and outside factors like the court backlog, are the reasons they can't keep up, and in turn, there are victims like Robin Baucom, whose lives are lost to senseless violence.

"Until something is done to get a handle on the crime out there and give the police what they need - the backing, the money, to get more effort into getting people off the streets, it's going to get worse," Gail said. It can happen to anyone. And when it happens to your family, you realize how much needs to be changed."

However, not a single dollar was approved to add more staff to the warrants division. ABC13 reached out to Gonzalez because the numbers are concerning, and residents deserve to know when there will be a change.

"We are not going to give up, and we are working closely with HPD and will try to grow partnerships to expand our reach and pursue more wanted offenders," Gonzalez said.