Discovery Green played host to the first of what will be many protests against the NRA throughout the weekend of its conference.
KTRK 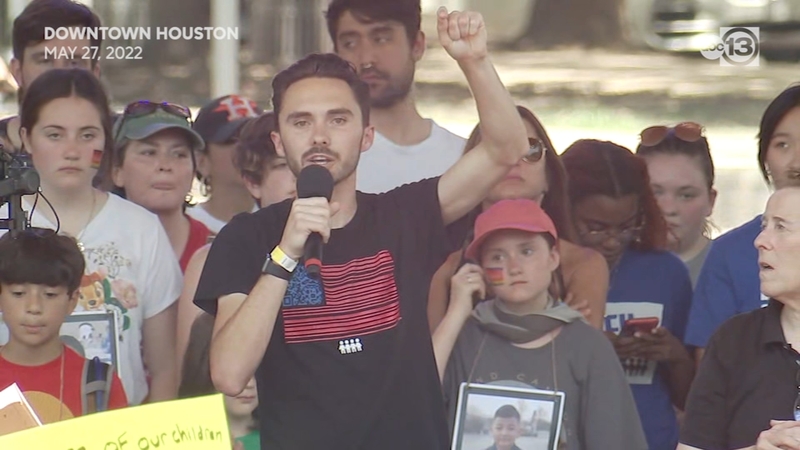 Parkland survivor accuses some NRA attendees of being complicit

HOUSTON, Texas (KTRK) -- Thousands of Houstonians and notable city and state leaders took a stand Friday afternoon through peaceful protests to get the National Rifle Association convention canceled. They argue that having a conversation about gun laws at an annual convention is insensitive to the recent tragedy in Uvalde involving an elementary school shooting that left 19 children and two teachers dead.

The NRA convention has been booked for two years, and up to 80,000 people are expected to attend. Mayor Sylvester Turner expressed that even though he wishes organizers would consider postponing the event, especially in the wake of the massacre, there is nothing the city can do to force a cancelation that wouldn't expose them to legal liability.

"You're talking about 19 of our precious children, and I say that because you don't have to be the biological father or mother," Turner said during Friday afternoon's briefing at city hall. "They are our children. And you know what? They are not Democratic kids, right? They are not Republican kids. They are just kids.

"They should cancel it today, tomorrow and the next day. They should tell Donald Trump to stay home," Jackson Lee said.

SEE ALSO: NRA convention in Houston day 1: Who is attending? Who canceled? Where are the protests?

Former President Donald Trump confirmed in a statement he is set to attend the convention and will be speaking Friday afternoon.

Survivors of the Parkland and Sandy Hook shootings were also at the news conference, standing in solidarity.

A survivor in that shooting, David Hogg, started March For Our Lives, a student-led demonstration in support of gun control legislation. The organization offers support and resources to people and communities impacted by gun violence.

"I've done this work for four long years. Four more years than I should have had to because this issue should have ended before I was born. I was born a year after Columbine, and now I'm speaking to you the generation that has been failed frankly," Hogg said.

The same gun that was used in the Parkland shooting has been used in so many other shootings, Hogg noted.

The advocate pointed at gun violence as the enemy in this fight.

Hogg used this platform not to attempt to vote any sole individual or governor out of office, but to ask for allies in gun owners, teachers and students.

"Even if you got rid of one governor, if you still have this system in place that enables somebody to allow our children to die in their schools and communities, it doesn't matter what the name is or what the letter is that's next to them. That system is still there," he said.

Bishop James Dixon called on Gov. Abbott to make an executive order to ban assault weapons. He also suggested that red flag laws be implemented in Texas and throughout the United States.

"As long as we don't have a ban, our leaders should be held accountable. They don't belong to the public," Dixon said.

Thirdly, Dixon called on lawmakers to raise the age of purchasing a gun to 21.

Under the Gun Control Act, shotguns and rifles, and ammunition for shotguns or rifles may be sold to anyone 18 years of age or older.

"This must happen so that we can make sure that people who do have guns deserve to have a gun can be trusted with a gun," Dixon said.

"Let the life of children, and the life of grandmothers, be more important than gun issues," said Randi Weingarten, the president of the American Federation of Teachers Union, who alluded to the Uvalde gunman shooting his own grandmother before the school rampage.

A protest organized by several local groups Friday got underway at Discovery Green. Beto O'Rourke, the Democratic candidate for Texas governor who interrupted a Uvalde press conference the day after the shooting, was there.

"We will never forget them. We will never forget Uvalde. The time for us to have stopped Uvalde was right after Sandy Hook. The time for us to have stopped Uvalde was right after Parkland. The time for us to have stopped Uvalde was right after Santa Fe. The time for us to stop the next school mass shooting is right now, here today, with every single one of us," said O'Rourke.
Report a correction or typo
Related topics:
societyhoustonted cruzsylvester turnerhoustongreg abbottbeto o'rourkedemocratsnrapoliticsschool shootingrepublicanstexas politicsprotesteventshouston politicsuvalde school shootingguns
Copyright © 2022 KTRK-TV. All Rights Reserved.
NRA
NRA convention in Houston day 3: Protestors demand change
Uvalde school police underwent active shooter training 2 months ago
Arlene Alvarez family brings comfort to Uvalde children
NRA convention in Houston day 2: Protests continue at Discovery Green
TOP STORIES
17-year-old charged with murder after giving friend ride
Biden signs landmark gun measure, says 'lives will be saved'
Settlement would forgive $6B for defrauded college students
Jet pack person seen near LAX by a pilot attempting to land
Argument between two groups leaves 2 dead and 2 injured
Bald eagle snatches Yorkie off porch: VIDEO
Norway terror alert raised after deadly mass shooting
Show More
Women's clinic closed for abortions after Roe v. Wade was overturned
Body discovered on Galveston beach in 2020 remains a mystery
Congress sends landmark gun violence compromise to Biden
Supreme Court overturns Roe in landmark case on abortion rights
Companies willing to cover travel costs for those getting an abortion
More TOP STORIES News