The family of an inmate, who died surrounded by jailers and nurses, filed a federal civil rights lawsuit

HOUSTON (KTRK) -- Attorneys for Kenneth Christopher Lucas, who died in 2014 after being 'effectively placed...in a hogtied position' and removed from a Harris County jail cell, filed a wrongful death lawsuit Tuesday against Harris County and a series of correctional officers.

A video released of the event shows officers in riot gear on top of Lucas at various times.

The video is difficult to watch and shows Lucas being removed from his cell in distressing detail.

Note: This video contains explicit language and disturbing scenes and may not be suitable for all audiences 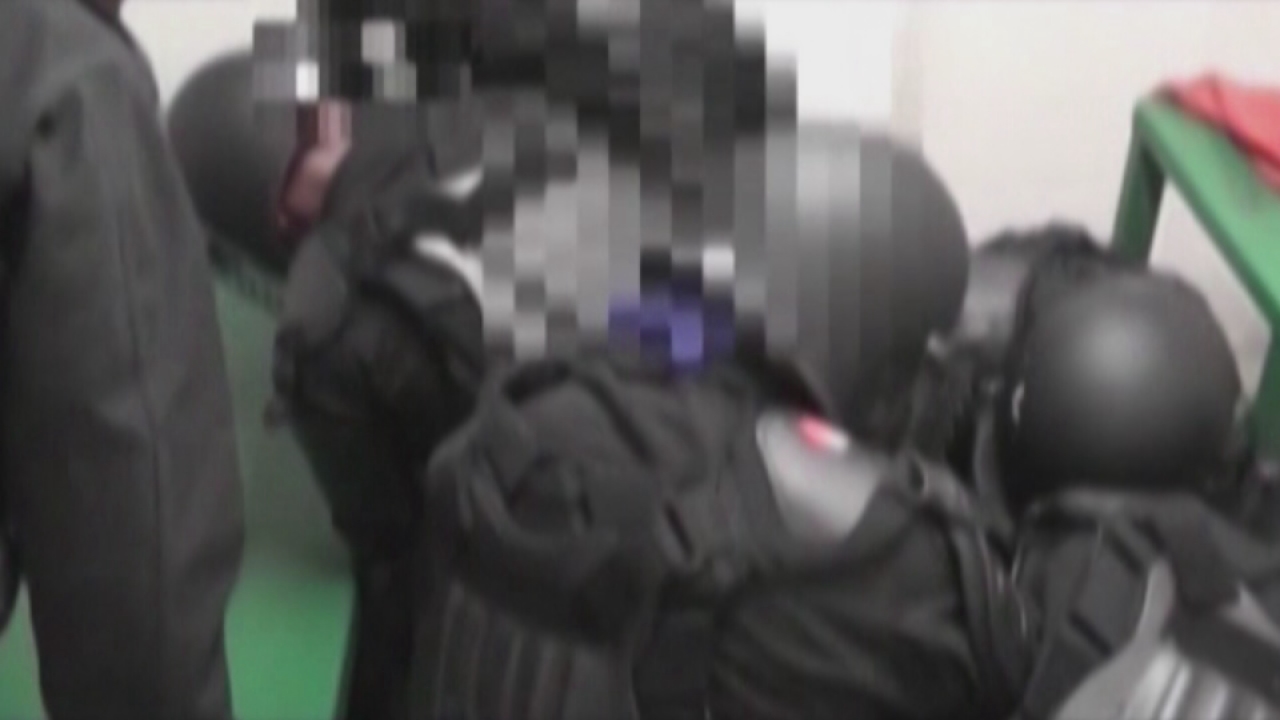 "Please take this off me, I cannot breathe," Lucas gasps at one point.

Jailers told him to relax, the video shows.

"You relax, you will be able to breathe," a corrections officer said at one point.

Nine minutes later Lucas stopped breathing inside the jail medical clinic and only then did jailers in SWAT gear climb down from his lifeless body.

Jailers were trying to get an uncooperative Lucas from his cell and claim they were worried about a possible weapon he'd made from a cell smoke detector.

Lucas, 38, was arrested in February 2014 for interfering with child custody.

After getting him from the cell, they cuffed Lucas' hands high behind his back. His knees were bent back and they were on top of him for 15 minutes. The inmate's feet were also cuffed and held high on his own back while another armor-protected guard sat on them for 20 minutes, the video shows.

According to the lawsuit: "At one point during the officer's initial attack, Mr. Lucas exclaimed, 'I'm going to pass out!' The officers made no adjustments and continued to apply pressure and to sit on top of him as he lay face-down on his stomach."

Deputies yelled at Lucas to "stop resisting" as he is heard screaming for help and saying "get off me."

"It would have been better for them to take a baseball bat and hit him with it 20 times than do what they did," said Jeff Edwards, Lucas' family attorney. "Brutal and excessive force was used against him. Sheriff Garcia should've told his men not to do this."

"Hearing the words 'I cannot breathe,' they should have been aware to release pressure off him and they didn't," said Cassandra Salcido, the mother of two of Lucas' children. "He was a human being like everybody else. Nobody deserves to go in there and not come out."

Edwards also said he would depose former Sheriff Adrian Garcia. Garcia resigned from the sheriff's post in May to run for mayor.

Edwards argues in his suit that Lucas' death was preventable. He claims it was this kind of abuse that the U.S. Department of Justice warned Harris County not to do in a lengthy 2009 memo finding too much use of force at the Harris County Jail.

The Harris County Sheriff's Office took the rare step earlier this year of releasing the video showing Lucas' struggle with jail guards in the minutes before he died.

Garcia has long argued that after the 2009 Department of Justice memo, he retrained his teams in connection with removing uncooperative inmates from cells.

Garcia also wasted no time calling in the Department of Justice after Lucas' death to get its expert evaluation. He also added a medical staffer to the jail SWAT team for specifically for cell extractions.

Current Harris County Sheriff Ron Hickman did not respond to two phone calls or an email asking about the current policy for the cell extraction on unruly inmates.