The blaze broke out Thursday morning inside a public housing project in the city's East Village neighborhood.
KTRK 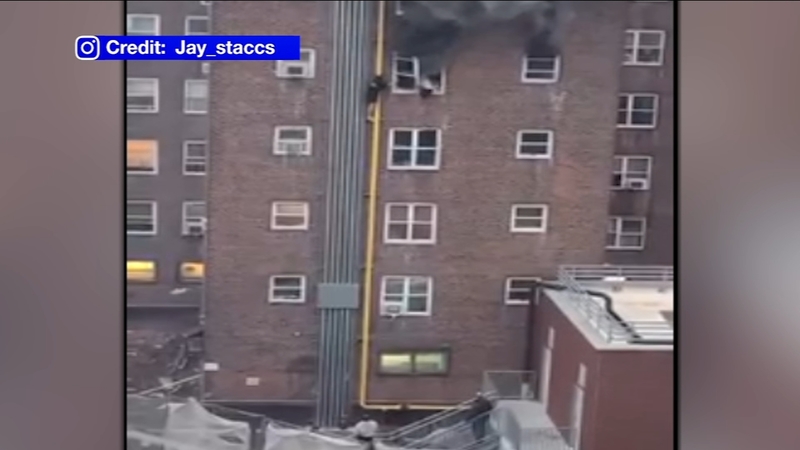 NEW YORK -- Two teenagers escaped a deadly fire on the fourth floor of a New York City apartment by climbing out of the window and sliding down an exterior pole.

Video shows the 18-year-old woman and 13-year-old boy shimmying down the pole and scaling the building as neighbors watched in horror and flames raged out of a window above their heads.

The blaze broke out Thursday morning inside a public housing project in the city's East Village neighborhood.

MORE: The fire has been brought under control. It is in the city run Riis Houses apartment complex.
@ABC7NY pic.twitter.com/WbtmiTnjVx

A 32-year-old man was killed, and a 46-year-old woman was critically injured. The two escaping teens were treated for burns and smoke inhalation but survived, and four others suffered minor injuries.

Multiple electric bicycles were found inside the apartment where the fire originated, and fire marshals are looking into the possibility that they sparked the fire. Residents said they heard a loud explosion before the building caught fire.

Neighbor Tashaka Owens said she believes the teenagers would not have escaped the building alive if it wasn't for that exterior pole.

"They were about to jump out the window, but everyone kept telling them, 'Hold on! Hold on!' So when they held on, they got onto the side of the pole, and they started sliding down ... and those kids, they made it down," she said.
Report a correction or typo
Related topics:
new york citynew yorkfatal firefiredeadly fireapartment fireu.s. & world
Copyright © 2022 KTRK-TV. All Rights Reserved.
DEADLY FIRE
1 killed when pick-up hits dump truck and catches fire
2 deadly fire victims were Galveston firefighter's children
2 children killed in Galveston apartment fire, authorities say
1 dead in west Houston townhome fire, officials say
TOP STORIES
Shooter who caused Texas school lockdown in custody, police say
Weather Alert Day: Storms move thru SE Texas bringing much needed rain
Missing Alvin ISD employee who 'had deep secrets' found safe
Mickey Gilley's life to be celebrated at public memorial in Pasadena
Ready to cast your ballot? 50 primary races headed to runoffs
Hidalgo to release data on gun-related homicides ahead of NRA meeting
Woman was drunk when pushing baby in stroller on highway, police say
Show More
Heard rests case at libel trial without calling Depp
Travis Scott faces new lawsuit, but it's unrelated to Astroworld Fest
Mom hears late son's heartbeat in 14-year-old boy for 1st time
Endangered sea turtle nest found on Galveston Island State Park
Young Thug rap lyrics used as alleged evidence in RICO indictment
More TOP STORIES News