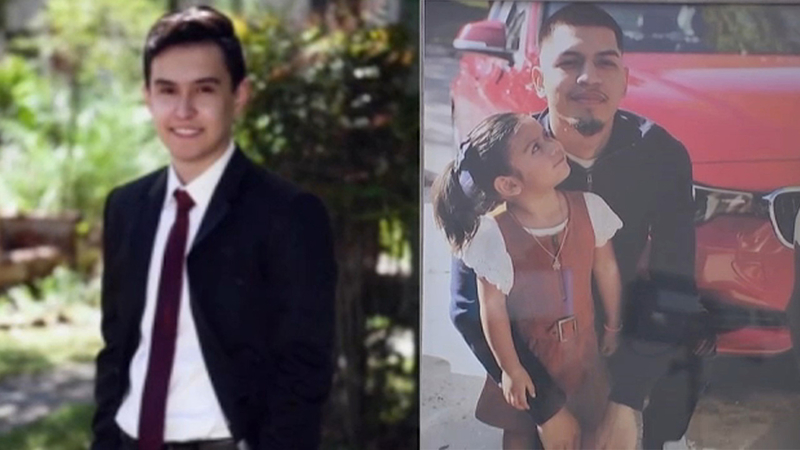 A group of young men were filming a rap video when they were ambushed by gunfire, according to Harris County Sheriff Ed Gonzalez. Two men were killed and seven others were hurt. Deputies are still searching for the suspects.

Gonzalez said it happened around 9:30 p.m. Friday in the 500 block of Smart at a business park.

The rapper, Miguel Guajardo, who goes by Cashout Ace, was filming the video when deputies say they were ambushed in a drive-by shooting. The two victims were identified as 20-year-old videographer Gonzalo Gonzalez and 22-year-old Jonathan Jimenez, a father to a 3-year-old girl.

This is Jonathan Jimenez with his 3yo daughter Emma. He and 20yo Gonzalo Gonzalez were killed and 7 others shot while filming a rap video. @HCSOTexas is asking for your help finding the suspects. @abc13houston https://t.co/ARVpbG8Iqj pic.twitter.com/AKkCA9CZZY

Deputies say the motive is unknown. They are examining ballistics and checking to see if there's any surveillance video.

"They weren't there to do any harm," said Jimenez's mother. "They wanted to film their video and just go home."

Jimenez has a 3-year-old daughter named Emma. The family said the little girl has been asking where her father is. For the entire Jimenez family, it's heartbreaking.

"I love him, and I want him to come home. That's all I want," said his mother. "I just want my son to come home. Like, I'm not complete without him."

The family of Gonzalo Gonzalez is also mourning the loss of their son. He was his parents' only child.

"When it's your only child taken away from you, it hurts," said his father.

Gonzalez was studying marketing at the University of Houston. He worked at his family's store on the east side on the weekends and also pursued his passion, videography, on the side.

"He was a great son, someone you want as a son," said Gonzalez's father. "He was passionate in what he was learning, his craft of photography."

Anyone with information is asked to contact the Harris County Sheriff's Office or Crime Stoppers at (713) 222-TIPS.