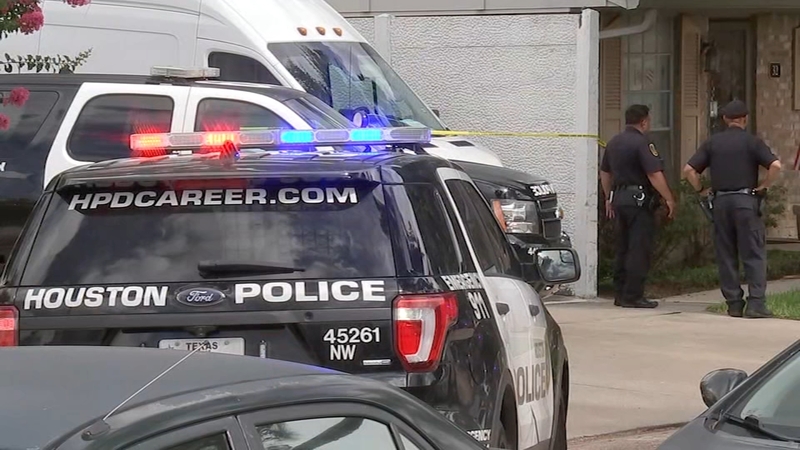 HOUSTON, Texas (KTRK) -- A mother and daughter were shot to death Sunday morning at a west Houston apartment complex, and the man believed to be responsible was wounded by officers, according to Houston police.

It happened around 9:15 a.m. in the 1000 block of East Tri Oaks Lane near the Katy Freeway feeder road.

Officers were responding to a call about an assault in progress when they saw a woman arrive and knock on the apartment door, according to Houston assistant police chief Yasar Bashir. She was shot point-blank when the door opened before the gunman began firing at police, Bashir said.

Officers returned fire, striking the man multiple times before he retreated inside the apartment where he remained for some time before voluntarily giving up.

He was taken into custody and transported to Ben Taub Hospital where he was stable.

SWAT officers found the body of another shooting victim during a sweep of the apartment, according to Bashir.

The victim inside the home, described as a woman in her 30s, was the accused shooter's live-in girlfriend, Bashir said. The woman who was shot outside, believed to be in her 60s, was the woman's mother, Bashir said.

It wasn't immediately clear when the woman found inside the apartment was shot.

No officers were hurt during the incident, but their police cruiser was damaged by the gunfire.

Initial reports that the incident was a home invasion call were inaccurate, police said.

CLOSE CALL: Our responding HPD officer’s patrol vehicle with bullet strikes from a suspect who opened fire on the officer outside the apartment on East Tri Oaks Lane, near Wilcrest and 1-10. #hounews https://t.co/cphrdgHnBQ pic.twitter.com/RPf03pBVJJ

Isabel Martinez with the Houston Area Women's Center said since the pandemic hit in March of 2020, the organization has seen a continuous increase in domestic violence cases and victims who say they feel "stuck." Those victims say they find it difficult to reach out for help when their alleged abuser lives with them.

"I would like to tell people who are in these situations that they are not alone," Martinez said. "There are resources available. There are people out there who will believe them. If they are wanting to see how they can get to a safe place, we can definitely help brainstorm with them. What does that look like? What are some plans we can do? We talk about that on our hotline, the different types of safety, financial safety, emotional safety, physical safety more than anything."

Maisha Colter, the CEO of AVDA (Aid to Victims of Domestic Abuse) said that while they have seen the increased number of cases plateau in recent months, the organization saw an increased need for therapy services in children who have survived domestic violence.

"The most important thing is we want people to survive, and so what we want is for them to reach out," Colter said. "Domestic violence thrives in secrecy, in fear and shame. Please don't be ashamed. Obviously, be cautious and fear is OK, but just know that accessing resources is probably the best thing they can do to keep them safe and keep their loved ones safe as well."