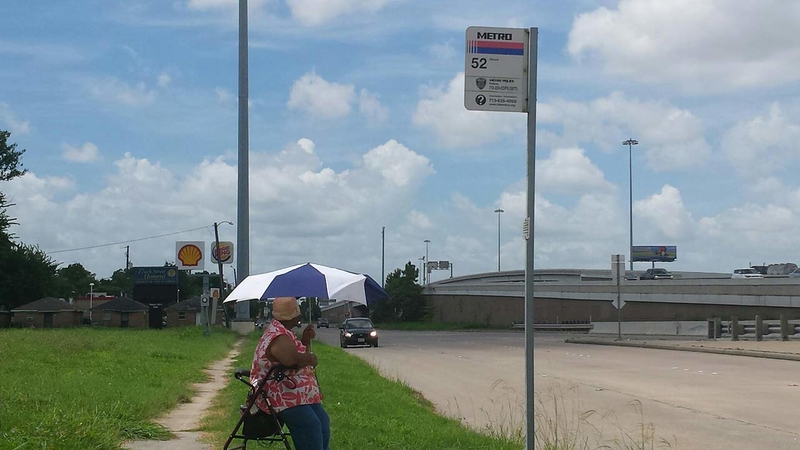 HOUSTON (KTRK) -- Even as it launched its new "network," Houston METRO said it would be monitoring bumps in the road, as some bus routes changed course, others were eliminated, with the goal of making bus travel more efficient. It was the first overhaul of its kind in generations in Houston.

Twenty routes have been turned into high-volume, high-frequency lines, where buses appear every 15 minutes during peak hours. The reworked routes also carry people to areas other than downtown -- to employment hot spots like the Medical Center, the Galleria area and more.

Just northeast of downtown, in Houston Fifth Ward, it's difficult to find a fan of the new network.

There are few shaded bus stops here. At the corner of Jensen and Lyons, what appears to be a temporary bus stop sign is attached to a pole on a yellow stand. A rider took cover in the shade of a nearby tree -- a shelter from the unrelenting sun.

"They need to do something out here," said Sherry Green, waiting on the #11 Lyons bus to take her to work in the med center.

The lack of shelters is a problem, according to Joetta Stevenson, of the Fifth Ward Civic Association and the Super-Neighborhood Council. But there is more, she says, that needs to be addressed.

The area depends heavily on public transit and has for generations. "Buses aren't an amenity, they're a necessity," she said. And some of those bus routes by which people would set their watches have changed. "We knew where the buses would take us and now it's total chaos and confusion. People don't know and they don't understand," Stevenson said.

Outside the community center, seniors whose day revolves around the activities inside, complain that they've waited longer for buses for two days. One man said he boarded the bus he always took, but suddenly it took him to somewhere he'd never been before.

The makeover is a change for METRO, and it appears, for a lot of people in Fifth Ward. A METRO app that explains what buses will take you where and when is available, but few seniors at the community center have a smartphone or the interest in using an app.

METRO CEO Tom Lambert said the agency met with Fifth Ward community groups earlier this year. He said new bus shelters are in the works for the area -- nearly 40 by the end of next year. He sees the shelters as a way to encourage more ridership in Fifth Ward.

In response to the complaints and confusion expressed about the new routes, Lambert said METRO is addressing the issues constantly, refining and correcting to make it work for those who use it.

Stevenson admittedly is not impressed with the changes so far. Neither is Sherry Green, waiting at Jenson and Lyons. "We need them to do better."