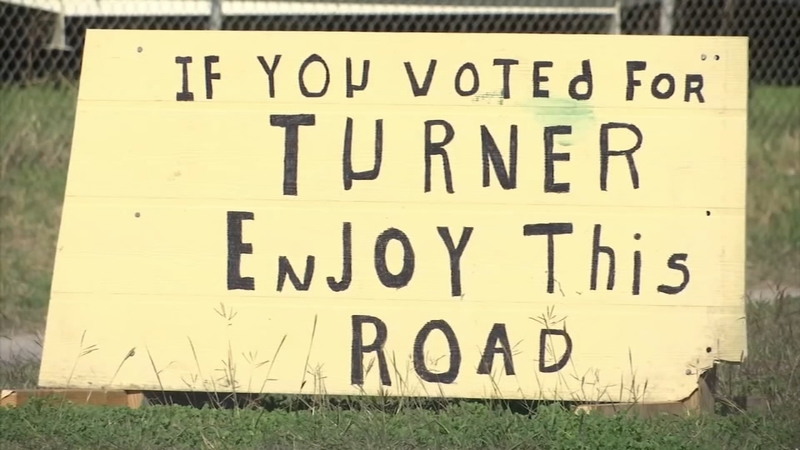 HOUSTON,Texas (KTRK) -- Days after winning the runoff election, a new sign taking aim at Mayor Sylvester Turner was placed on the side of a road in northeast Houston.

In the past, Turner called Oates Road a "bad road."

"It's about the worst road I've gone down," driver Cephas Thornton said. "They say you go to the school of hard knocks. This is the road of hard knocks."

'ROAD OF HARD KNOCKS:' Northeast Houston drivers are growing tired of a stretch of road. A new sign reads, "If you voted for Turner, enjoy this road." @abc13houston at 5pm, is there any relief in sight for drivers? pic.twitter.com/kYJoozyvOt

The sign reads, "If you voted for Turner, enjoy this road."

"Oates Road is basically a street with a whole lot of cracks and gravel," driver Deadrian Glover said. "It's basically destroyed."

RELATED: How to get reimbursed for pothole damage in Houston

In the past, city officials told ABC13 that the entire street will need to be reconstructed.

County commissioner Adrian Garcia's office says they're still interested in partnering with the city, but the main issue is money.

Garcia's office said they're working with the city to secure grants and other partnerships, but are still working on the exact cost of the road.

Drivers are urging for officials to complete the project as soon as possible.

"I've had three lugs break on my car and I just replaced them," Glover said.

"I've gone through tires, and the suspension in my car is terrible," Thornton added.