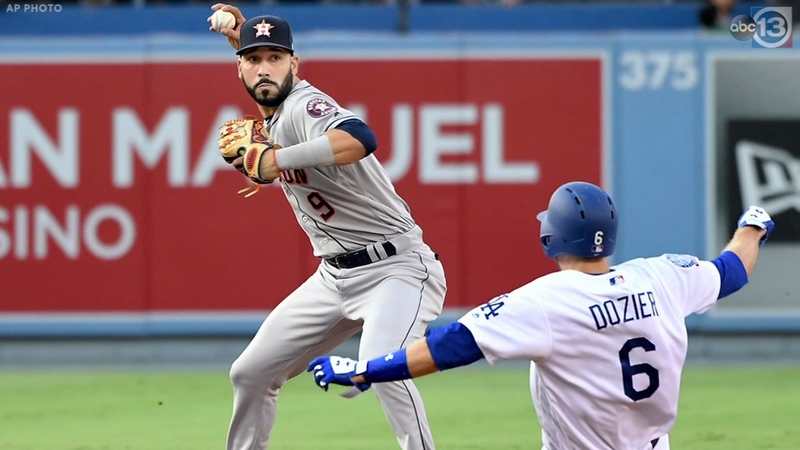 HOUSTON, Texas (KTRK) -- Marwin Gonzalez proved to be the Swiss Army knife that the Houston Astros needed over the last two seasons.

Especially in a 2018 campaign that saw injured stars up and down the batting order, Gonzalez proved he can be inserted to give the team a chance at competitive parts of the season. Case in point, the 29-year-old played every position at one point of 2018 except for pitcher and catcher.

And when a grounder or relay was needed at any part of the field, he was ready to gun a runner out.

His value is not hidden to MLB circles and the Astros are aware that a big money contract is on the horizon for the free agent known as "Margo."

"What club is not going to bring up Marwin Gonzalez," his agent Scott Boras told MLB Network Radio on Tuesday, adding that Gonzalez's camp has met with 14 teams about his services.

Marwin has earned every last dollar. Forever the man who changed the course of baseball history in #Htown with his 9th inning HR in game 2 of the 2017 World Series. #Astros will miss him. https://t.co/joH0z9YsEV

Observers give Houston long odds to retain him.

After all, in the last two seasons, he appeared in 134 and 145 games, respectively. He padded his stats in his breakout year, the 2017 World Series-winning season, batting a career high .303 with 90 RBIs and 23 home runs.

In terms of fielding, Gonzalez made his money in the Astros' much beleaguered left field position, starting 65 games and recording 98 putouts in 2018. From the middle of the infield, where he took up residence for injured Carlos Correa and Jose Altuve, he totaled 110 fielding assists on 177 chances.

So, what happens? How should the Astros remedy the Marwin Gonzalez-sized hole in their lineup?

MLB.com beat writer for the Astros, Brian McTaggart, brings up Yuli Gurriel as the prime candidate for that role.

Gurriel is due to make $18.8 million over the next two seasons. Similarly seen as a reliable role player in 2018, Gurriel, who is primarily a first baseman, was placed at all infield positions at some point this season. He played at either second, third or shortstop in 38 games, converting 20 putouts on 73 chances. Tyler White would fill the role at first in that case.

While that versatility can help, it still doesn't definitely address what the Astros must do for left field, whether that's signing a replacement out of free agency (Bryce Harper), committing to a cost-effective prospect (Kyle Tucker) or giving the job to Tony Kemp, another player whom Houston had to extensively utilize.

For now, Astros fans may have to replay the glory of Gonzalez's clutch homer from Game 2 of last year's Fall Classic.