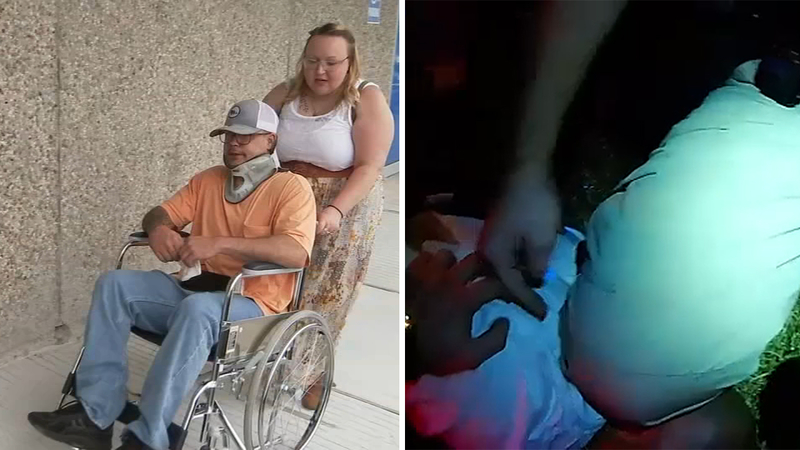 MAGNOLIA, Texas (KTRK) -- A Montgomery County man is calling for a civil rights investigation after he says his neck was broken by law enforcement during a traffic stop.

The 40-year-old says he was on his motorcycle driving home after visiting his brother when his tire hit a dip in the road and he fell off his bike.

He stood up to a Precinct 5 Constable Deputy shouting demands to get on the ground.

Dash camera video from the deputy shows he had been following Berger with lights and sirens, but Berger says he did not hear the sirens because of the roar from his motorcycle and he did not see the lights because he does not have rear-view mirrors on his bike.

Body camera video shows within the first 45 seconds of the stop, the deputy deploys his Taser on Berger, who falls to the ground.

In the 16 minute video, Berger remained on the ground, hands behind his back, for 10 minutes before being picked up by deputies.

After hearing the verdict in the Derek Chauvin trial, in Houston, it's a question of what kind of changes we will see here. Here's what Houston Mayor Sylvester Turner and HPD Chief Troy Finner said about what's next.

"The actions of these officers were not split second decisions that had to be made in a tense, threatening or rapidly evolving situation. They happened in a controlled situation where the officers had the opportunity to do a better job and to utilize their training in a more effective way," said Alberto Ruiz, Berger's criminal defense attorney.

The body camera video from the same deputy shows four more deputies arrive as they hand-cuff Berger and place a knee on his neck two separate times, once before his neck is broken and a second time after Berger begins complaining that his neck is broken.

Around the 11 minute mark, the video shows the deputies pick Berger up from the ground and appear to walk him towards a patrol car, but Berger appears to hit the ground, and the body camera video goes to black.

"I think you just broke my neck," Berger is heard saying on the video.

During a press conference with his attorney, Berger arrived in a wheelchair as he continues recovering from an emergency eight-hour spinal surgery from the night of his arrest.

"Because they thought I spit or said I spit, they all picked me up and tried to pull me every which way, and then they slammed my head into the ground or a moveable object. I don't know. It was dark, but I felt my neck break when they did that," explained Berger during the press conference.

After his surgery, Berger was still booked and charged with evading arrest and harassing law enforcement.

His attorney says bond was originally set at $300,000, but a judge later lowered it.

He is on house arrest and must wear an ankle monitor as part of his bond conditions.

Marcelo Garcia's family attorney was adamant that the 46-year-old did not have a knife on him before the shooting. But bodycam video shows otherwise.

His defense attorney called all of it insult to injury saying, "Gary is the victim of police brutality. The same type of violence against citizens we see almost daily in the headlines across the nation."

"Montgomery County Precinct 5 Constable Chris Jones denies the allegations made by Mr. Berger and his counsel. Although the investigation is still ongoing, it is clear that the statements by Mr. Berger, who has a lengthy criminal history, including prior convictions for involuntary manslaughter and felonious assaults, are not consistent with the video recordings of his arrest on January 19, 2021. Our agency is committed to serving and protecting the citizens of Montgomery County in a transparent and open manner. We look forward to working with the District Attorney's office and other appropriate law enforcement agencies to ensure a thorough and detailed review of the incident is completed."

ABC13 confirmed Berger is currently on parole for a manslaughter conviction in Ohio.

The Montgomery County District Attorney's Office tells us they are moving forward with their criminal charges against Berger, but say they will also review the case for potential action against the deputies.

Ruiz says they will be putting together a civil rights complaint and file a federal lawsuit.